It’s been about a month since my last post on the COVID-19 crisis and boy have things escalated! Mandatory lock downs, curfews, prolonged closures, millions out of work, and no clear plan forward, the country is becoming more and more panicked over this pandemic. While cases have spiked in places in the US, such as NYC for example, and more have sadly died, the death toll has still not surpassed the average flu season death tolls and the flu still kills far more Americans per year. I will concede however, that it is good to take more precautions and enact some measures of social distancing such preventing large gatherings and protecting the most vulnerable groups such as the elderly and immunocompromised and those with preexisting conditions. The problem is, in addition to more legitimate public health measures, the Left has decided to piggyback other agendas onto it taking advantage of the panic surrounding COVID-19 and these are only a few examples:

Double Standards About Who Gets to Stay Open

We can all agree on reasons why places like grocery stores and healthcare facilities should counts as essential during a shutdown. Basic necessities such as food, water, sanitation, transportation, essential non-elective healthcare etc… are needed to keep the country running. However, the point has been made time and time again, with everyone crowding in a large busy supermarket, how is this different from people socially distanced in the workplace such as in office cubicles or working outdoors in the fresh air? Yes, your shift is longer than a 20 min grocery store run, but many workplaces can institute ways to screen employees who might have COVID-19 and cut off the public from coming through in certain jobs so it’s you and your pre-screened coworkers. Hospitals, which are required to remain open do such practices and even that is no way a fail safe!

Even if one could argue that still wouldn’t work, why do liquor stores for instance get to be open? Getting drunk is essential but not keeping employees employed? Alcoholics whining about their cravings counts as a need for survival? A need is not simply what you want to whine about the most, or is merely a convenience. The need to get Americans back to work and earning outweighs many of the risks of dying from COVID-19 for many able bodied healthy people. Millions die from the flu every flu season.

Luckily there was some reason listened to in that online events and socially distanced events were allowed. However, an incident during a socially distanced church congregation in Greenville, Mississippi showed clear bias. The congregants were all in their cars outside the church as the sermon was broadcast by radio and were socially distanced in what was effectively isolation bubbles being enclosed in their cars so they did not violate the no gatherings orders. However, police ticketed each member $500 anyways, and there is talk of the possibility of tracking down each and everyone who does something like this through their licence plates, to give them quarantine orders and even threatened the pastor with arrest! Even as a non-religious person, I can easily sense much of the bias and contempt the Left has for traditional Christians in general, and this incident showed it. Shockingly too, this took place in a more religious and conservative state. As some aptly speculate on, will there be a similar response to mosque gatherings?

Another major example is the shutdown of an entirely ONLINE class related to firearms. As there is no argument whatsoever to shut down an online course with no contact at all between people, the bias is blatantly obvious, and smells very much like an excuse for the Left to further limit legitimate firearm use. This brings up another point: Why when certain non-essential business like liquor stores and having take out get to stay open, places of worship and gun stores aren’t? To many of deep faith, their freedom to worship in their church is being impeded and they sincerely view their right to worship as essential. The means to self defense for many is an essential need as well despite not being on par with food or water…. don’t get me wrong, I’m all for as many things possible staying open, but why cherry pick when millions need to get back to work or have needs deeper than getting their next drink? Why not prioritize non-essential places to open up again rather than do so arbitrarily?

Pushing for Race Based Victimhood By Crying “Racism!”

Of course for the Left, anything and everything can be racist! Trump’s early calls for travel restrictions on China, the epicenter of this entire fiasco was deemed racist. So was shutting down our borders to not catch it from abroad. Yet look where we are now. The alleged new epicenter! Maybe if that was heeded sooner we’d all be outside enjoying life right now. Yet like when Trump called for restrictions on countries harboring the scourge of terrorism, the Left cried racist and made us vulnerable with their open border policies.

Note too, many called it the China virus or Wuhan virus before it was deemed “racist”, only later to decry those names. They argue it stigmatizes Asian Americans despite countless other diseases with place names that have not garnered cries of racism and stigma. Marburg? Ebola? Lyme disease? Spanish Flu? etc… For a group that has more wealth on average than white people as a whole, has led the way in science and technology and whose only real big stereotype is being deemed the smart “model minority”, it’s hard to sell victimhood to Asian Americans. Until now… 😉

“WHO” is Really Calling the Shots?

The World Health Organization has been trusted by many in this country to provide accurate information and top notch science to addressing major public health crises around the world. However, no one is perfect and blemish free, and the WHO is showing it’s true colors… It’s leader, Tedros Adhanom, was elected as their head despite objection from the US at the urging of China. He has made several statements slanted towards China’s interests such as there being no more cases in Wuhan, which is highly doubtful, as well as saying early on to not restrict travel to and from China and when Trump spoke of defunding the WHO, he ominously commented on the US needing “more body bags”.  Also noting the WHO does not just serve us, and yet we’re putting more money into them than China even! Their interests are not primarily with our country. At least the CDC has our interests put first, but even they are not without bias and political pressures. If the DOJ and FBI can be corrupted against Trump, why not the CDC too? Not to mention, as I researched for this post, I noticed Google censored any dissent about COVID-19 being less of a panic than the seasonal flu and it was hard to find any data about flu deaths during this past flu season or graphs comparing the case numbers and death rates side by side. Makes you wonder….

COVID-19 is Contagious, but TDS is Even More Contagious!

In addition to actual public health measures, the Left made this the perfect opportunity to further bash Trump, twist his words and continue to block his efforts to really help the country get through this. Instead of coming together as a nation, they divided it just like always between them and conservatives who also want us back on our feet again. Trump says we have enough beds, enough ventilators, enough tests, yet they continue to call him a liar. He endorses a promising drug to help treat it, and the left wants to ban it and call it pseudoscience. Acosta accused Trump of making light of the pandemic, while Trump says he has to make the “biggest decision I’ve ever had to make” and that the meetings are the “saddest” in his presidency. Instead of getting behind our president in this tough time, many want to continue to tear him down. On a fun little side note, this dip in our economy was actually the peak during Obama’s 8 years in office 😉

If that wasn’t enough leftist lunacy, the COVID-19 pandemic apparently is seen as their perfect excuse to call for a total upheaval of society! Letting out prisoners due to COVID-19 is a prime example of this! Yes, prisons create close quarters, but why not then treat them like any other vulnerable population and give them healthcare in prison like normal? By that logic, all nursing homes should boot their residents out too as many have tragically seen several deaths all within one facility. Is it fair for murderers, rapists, robbers etc… to be released without having served their time? Are we safe from the now freed violent criminals? Mass ankle monitoring house arrest will NOT stop violent offenders from doing more harm if that’s their “solution”. These cries for empty the jails and prisons is a disaster waiting to happen if we lose all common sense.

Helping illegals over US citizens too is ridiculous as well. If they haven’t already been enough of a drain, they can now take away ventilators and beds from US citizens? Hop the fence over to the US to rain our hospitals further? Is that fair? It would be one thing if we had enough to go around, but since the Left argues we don’t, why are we prioritizing thousands from other places over our own citizens? Would the Left think it fair to do to any other country outside the hated West? No one wants to see people dying of any nationality, but when push comes to shove, America’s first duty is to it’s citizens, not the world at large. An article in The Atlantic, a heavily left leaning organization called for a more globalist view:

“One could also envisage a future in which America learns a different lesson. A communal spirit, ironically born through social distancing, causes people to turn outward, to neighbors both foreign and domestic. The election of November 2020 becomes a repudiation of “America first” politics.”

And yet, we need to put America first now more than ever if we’re to help fellow Americans. In times of crisis, hard choices need to be made, but putting our own citizens first should be an easier one to make. 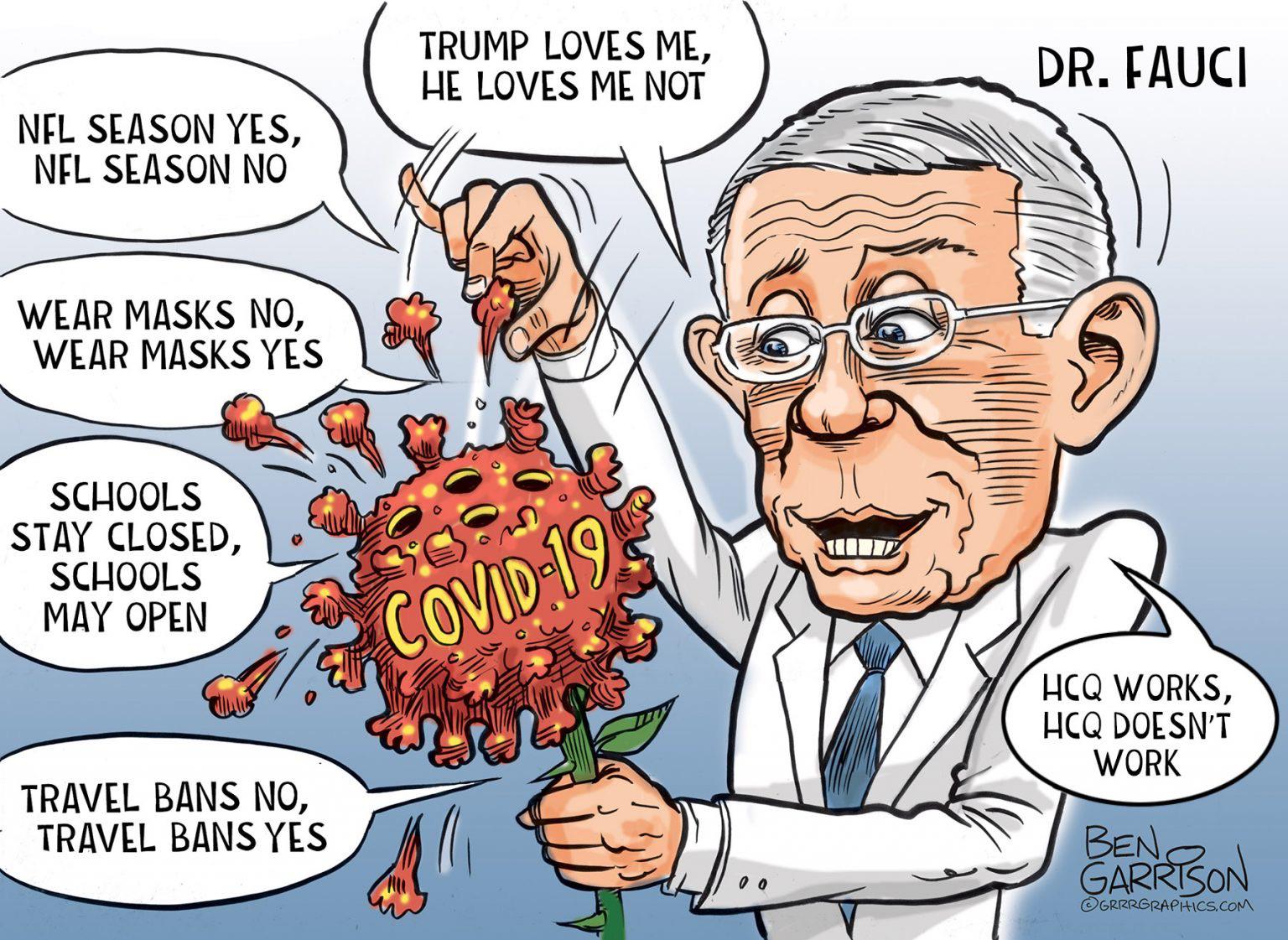 To my readers and loyal followers, we must advocate for clear answers, consistency and accountability in this uncertain time…