By now much of the world had heard of the recent coronavirus pandemic sweeping the globe. What started off in Wuhan, China has now spread across many countries, including Italy, Iran, and South Korea as some of the hardest hit. Now with Italy on lock down, many events cancelled, people quarantined, it seems like the whole world is coming to a standstill! Of course, it is better to take proactive steps to control the rapid spread and contain it before it escalates further. It is also important to know just how virulent this particular virus is and who is most at risk. We can’t down play the severity of the situation at hand here or abroad. In this globalized world we have shown it’s only one flight away from an international issue.

However, what may be even more dangerous is the high risk of fear mongering and misinformation that comes with this situation. Just because something is a problem, we can’t feasibly just put the world on hold. Yes, we should make reasonable adjustments that the evidence shows has a significant decrease in risk and strong justification. People who have symptoms should get tested and the sick self-quarantined. Some moderate social distancing for those who have been exposed to somewhere or someone with the virus is reasonable.

The trouble begins when we go overboard. “An abundance of caution” can go too far as well… Shutting down places where there are populations with low risk to contract the virus, younger and healthy individuals is not as needed as of now. The news cycle constantly playing up hysteria and panic to get their ratings does nothing except exploit 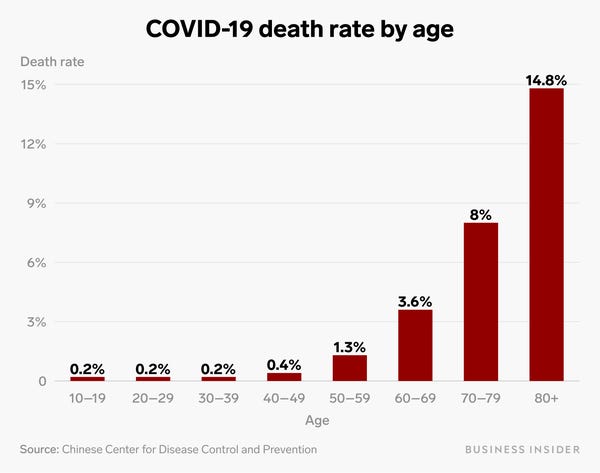 a novel situation. The CDC says right now the virus affects the elderly and those with preexisting health problems and respiratory issues the most, and others are most likely to get more mainstream cold or flu symptoms, but not the more deadly version. In essence, for most of the young healthy population, this is not too different from the seasonal flus that have gone around or the common cold. Data from the CDC also indicates that the vast majority of fatalities are in elderly people which of course is worrisome to many who are elderly and care about an elderly loved one, but for those out and about the most, it’s not like the black death! Not to mention, we weathered other storms of this kind; SARS, H1N1 flu, etc…. and the country survived and didn’t go into doomsday mode or have all of the country dead or dying. Nor is this COVID-19 virus all that novel:

Coronaviruses are a large family of viruses that are common in people and many different species of animals, including camels, cattle, cats, and bats. Rarely, animal coronaviruses can infect people and then spread between people such as with MERS-CoV, SARS-CoV, and now with this new virus (named SARS-CoV-2). (CDC.gov)

This is just a newer strain coming out that we need to build up an immunity to. Also as of now, the CDC gives a clearer picture of the risk for the average American.

And yet everywhere is shutting down and cancelling out of fear as if this were a higher risk and more deadly. I don’t remember the Ebola epidemic a few years back shutting down the country. It was mostly contained in Africa, however there were people suspected to carry it or have it come to the US. Believe me, those viruses have far higher mortality rates! Again, I don’t deny there is a need for enhanced cautionary measures. It’s all about a response proportional to the facts, not mainstream news hysteria and “what if” panic. America right now is a lower risk for most people, so most people should be able to still live their lives and not be panicked into going into plastic bubbles! Wash your hands thoroughly, be careful what you touch, keep clear of those who appear sick, be aware of your personal risk (ex. travel, age, health etc.) and such. But don’t stop living your life out of fear. We’re nowhere near that yet. We never have been in our history. This is not Ebola, or the bubonic plague we’re talking about here! This is a variation of a common type of virus we encounter every year. We also must look at some of the countries hit harder. Places like Korea, China, Iran and such have less than stellar medical care and living standards. Of course any disease will be more severe with less resources, technology and ways to stop it like in underdeveloped countries. Even in Europe, their public “free” healthcare system wasn’t great to start with before this! Our resources may be stretched, but theirs I’m sure is beyond the breaking point. That factor cannot be overlooked too in judging the true threat this disease poses to us here in the US.

Overall, the enhanced fear mongering does nothing to do actual help, and only creates unnecessary hurdles in our lives. Yes, this is a new virus, but new does not mean more deadly or harmful than many we encounter far more frequently and take for granted. Think of the flu that comes out as a new strain each season. Compared to COVID-19, the flu kills far more people globally than this has. And as far as risk goes, the 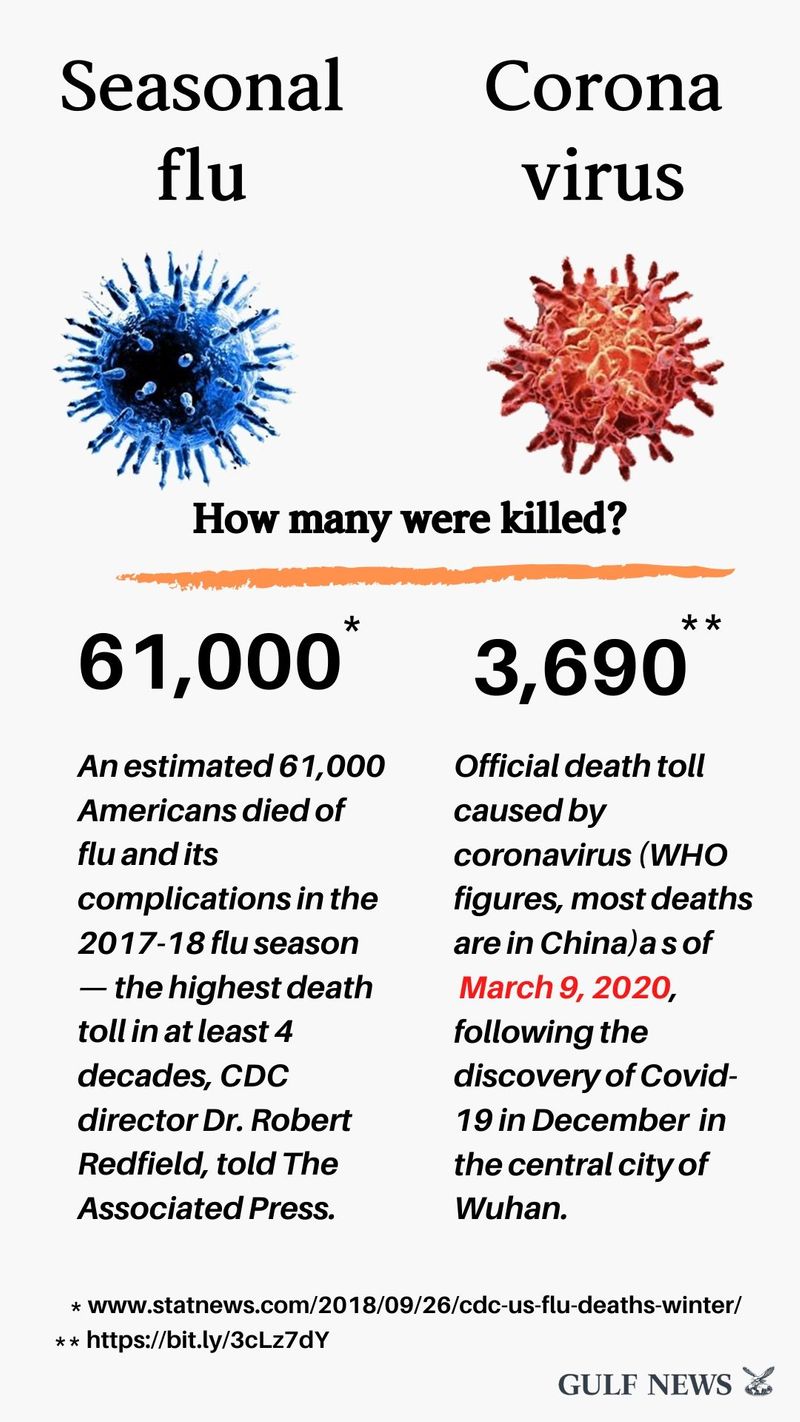 flu also targets the elderly and infirm more than healthy young individuals. Yet people take the flu for granted and downplay its threat to our health. Why? Why isn’t there a huge campaign each year to shut down everything due to a new flu strain every flu season? My guess is it’s simply not new anymore, thus we habituated to the idea of it. We fear what is new, what is novel. However we have been in similar predicaments in previous years and made it out. Ironically, the fear over this has spread far more prolifically than the actual disease!

Could it get worse? Anything is possible and I don’t have a crystal ball nor some magical guarantee, but until it actually does, let’s just live our lives like we always have. My elderly grandmother who of course I’m concerned about, is living her life as usual and has the perspective that she must do the things she loves while she still can. Someday she won’t be able to but for now she can, so she does. We all can learn from that attitude. This may get worse. We may have to have more restrictions on our lives because of this. But for now, let’s do what we can, until we can’t. Go to work, go to class, go out to dinner, go shopping, go run errands, go have fun… We as a country have weathered two world wars, a depression, terror attacks, other pandemics and such in our history and have always pulled through as a nation. Who says we can’t weather this storm too? This won’t last forever!

One last major point to add that has to be mentioned: The politicization over this virus has reached an all new low of unethical agendas! Leftists going so far as to wish coronavirus on Trump supporters by deliberately infecting a Trump rally is beyond disgusting! I can only hope more sane Liberals can be big enough to condemn that too, however much they dislike Trump. Also, blaming Trump for the virus, calling for him to take action and when he does, condemn him for it only blocks his efforts to stop the spread. Quarantining those cruise ships then recommending that diseased people not be let into the ports is harsh, but wise. Why should we risk thousands of lives onshore until we can properly control their reentry? A few severe cases and fatalities are tragic, but it’s the lesser of the two evils compared to hundreds or thousands more. I must say too any fear mongering by the Right also is wrong, but I haven’t seen it like how Leftist sources are playing up the hysteria. Funny coincidence this is around election time too 😉 This needs to be a bipartisan issue, as the virus does not vote red or blue. Using Coronavirus as a political propaganda tool is beyond unethical! It’s time we call out the mass hysteria, panic and propaganda!

52 thoughts on “A PSA by A Lady of Reason: Fear is a More Dangerous Thing to Spread…”