I apologize if this post sounds too technical or is too lengthy, but I hope it’s worth the patience to read! I highly recommend clicking some of the links as they provide more background info, or are really fascinating reads! I love scholarly works and hope my post reflects this 🙂

How powerful are the words we use? Do they control us, or do we have more control over words than we think? These are questions that social scientists such as anthropologists, linguists, and more pertinent to us, politicians (Think how to best convince us to vote for them!) want to answer. As many of my more frequent readers may know, I’m big into science and history! And my passion extends its influence into my thoughts, opinions and reasoning on the issues I address often in A Lady of Reason. Recently, I read some articles on the power of words and how language shapes our perceptions of the world around us from an anthropological and linguistic point of view. While some were great and insightful reads for all, others were disappointingly partisan and a jab at conservatives. I wanted to explore some ideas I thought of in light of reading some of these articles, but first, a key premise:

In linguistic studies and anthropology, a revolutionary theory was proposed by several scholars, most famously Edward Sapir and Benjamin Lee Whorf. Well known in the scholarly community as “Sapir-Whorf Hypothesis” (That being a misnomer as they never actually collaborated together on such an idea), it is basically the idea that the structure and words of a language have a profound influence on how you perceive the world and how you think. See, ideas, concepts and ways of looking at the world you think are just a part of reality, such as color perceptions, how we categorize things, numbers, and even the concept of time, can vary culture to culture! How do we know they don’t think like we might? The evidence is in the grammar and vocabulary of their languages. Now, critics have said that perhaps Whorf especially went a bit too far in his theory and edged into a sort of linguistic determinism, that is, language dictates what we are capable of thinking, but a more moderate interpretation still holds sway. After all, who can deny that words have great power over our minds?

And every propagandist knows that! Every great orator, politician, journalist and others know that words matter a great deal in how we perceive what they want to get across. “Actions speak louder than words”, but so does tone, as the other saying goes, “It’s not what you say, but how you say it” 😉 How is all this relevant to us one might ask? The short answer: Political correctness and the idea of “hate speech” as an exception to the 1st amendment.

Controlling and regulating our language is not a new thing. Every tyrannical regime has censored what people could say, and by extension, dare to think. Hitler did it, Communist Russia did it, Mao did it, and every dictator in between since antiquity! Orwell’s 1984 called it out in his concept of “news speak” in the dystopian novel where certain words were forbidden or more flattering euphemisms to steer your mind to different perceptions of the concepts encoded replaced other words. While we’re not in such a stark dystopia, there’s no doubt that certain words are, ahem, “undesirable”…

You must not say “illegal”, now it’s “undocumented”.

You must not say “retarded”, now it’s “intellectual disability”

You must not say “Muslim terrorist”, it’s now “extremist” or “terrorist” alone…

These are only some of many other examples I welcome you to share with us in the comments! The reasons behind these prohibitions are that the words are argued to be pejorative, or inaccurate. However, they do reflect the truth, or a valid usage of the word. “Illegal” refers to one’s illegal status in the country and is accurate, but is decried as dehumanizing, when in reality, it’s not about one’s humanity, but one’s immigration status! Saying “undocumented” has connotations and implies that the person is justifiably in the country, but is merely not officially recorded as a legitimate member. The political implications are profound for immigration debates.

The word “retarded”, not the insult, but the term used in medicine, was a legitimate usage of the word and was not pejorative. Nor were the terms idiot, imbecile and moron respectively until they too became out of fashion and “retarded” the new enlightened word! One can argue it is outdated and has taken on and pejorative meaning, but aren’t we just on a big euphemism treadmill, just replacing one term after another in a never ending cycle? No, saying someone is less intelligent or “not all there in the head” is not a nice thing, but the truth hurts sometimes… When do we stop trying to replace word after word after word for it?

In my last example, related to my first, if one refers to terrorists who are Muslim and did it out of religious (or Islamic, to put it frankly) extremism, then isn’t “Muslim” a pertinent modifier? Of course, the omission has more to do with politics than accuracy again… Charged terms in other debates too, such as “pro-choice” and “pro life” as opposed to pro- or anti- abortion, can bring on more of a squabble about terminology than the ideas themselves being debated. Words in summary, do greatly affect how we are swayed in these issues, more than we admit to think.

Another issue too in the Left’s “war of the words” revolves around more benign terminology, such as names for groups of people not meant to be pejorative, but were deemed so by the PC police! “Indian” is now “Native American”. You cant say “tribe” anymore to describe a more simple society of people then a nation or civilization. “Oriental” is also now un PC… Also common phrases and sayings, such as:

“Boys will be boys”

“America is a land of opportunity”

Among many others! Now deemed pejorative, sexist, racist, ablest, homophobic etc… they were once not thought of as any of those things, and used by all in society. Only after the Left deemed them un PC were they whined about and given much more negative meanings. Yes, language does change, and evolves, but the natural evolution of a language versus a social agenda are two very different things, and the Left by actively prohibiting such words seems to be doing the latter!

Words also hold great sway when they truly are meant to be pejorative, too! These words, the Left says, are soul crushing and demoralizing agents that oppress minorities, women, gays and many others! However, why is this? Apparently it’s now deemed false and un PC to say “Sticks and stones may break my bones, but words will never hurt you…”, but I still think there is truth to this.

Going back to linguistics, there is solid evidence words have power over how we perceive our world and things within it, but they also point out that words are merely sounds; morphemes, phonemes, syllables, strung together to make sense of our world. Those gibberish noises coming from our vocal cords are only given any meaning whatsoever by us humans who speak such sounds! To put it bluntly: Words are what we say they mean, including their connotations good or bad. It’s a key rule in fighting those school bullies, you let their insults get to you, they win as you give them power!

YOU decide how hurtful a word is to you. So does your community. If you let a slur, which is basically just another silly insult hurled by bullies, just bigger ones, crush your soul and intimidate and demoralize you, they win! The Left’s idea that a slur can hurt you like a knife or a bullet, is merely another control tactic to make one identify as a passive victim, rather than a victor. Take the linguists’ view to heart: Words are merely sounds assigned to concepts to talk about our world. That includes slurs. Something is only powerful when others give it power! Words only mean what we let them! Why let the bullies win, on the playground, or in the wider world?

Overall, this presents sort of a linguistic contradiction: Words shape our perception of the world greatly, yet we are in complete control of what they mean. Seems illogical, but I argue they are not mutually exclusive. Not when you think of it in terms that by determining what we let words mean, we control how we will then think! Your language does color your perception of the world, but unlike linguistic determinism, we are not the passive recipients of such control, but can be active choosers in what we will think by controlling the language that controls us! 🙂 In essence, we control how we look at the issues pressing to us, through the terms we use, what we value in society, the worldview we want to create for our society and so on.

In the right minds with the right words, shaping language is an amazing tool for progress, while in the wrong minds, leads to dictatorships, tyranny and disarray. The Left is in a battle to control what we can say, and by extension think. Using words as weapons, are working to socially engineer our minds and those after us! Now, both sides of course, can do it to each other, but the key is to let both sides use the words they feel are needed and not censor one side as this then smites that view of the world.

The Left wants to do just that, smite our view of the world. To make sure our side is presented in harsh terms while theirs is glossed over by flowery euphemisms hiding unpleasant truths, or an agenda is pushed by omitting a phrase they deem against it to be racist, sexist etc….  Just like how a lost language is also a lost culture, an entire worldview lost to oblivion, so will be our view if censored through terminology and language. More to the point, as some cultures deemed other languages and cultures not worthy of being part of the richness of humanity, and wiped out, isn’t it the same when our language, terminology, and ideas by extension, are also deemed not worthy of being spoken and thought of?

Never underestimate the power of your voice fellow patriots, and how you can through your words, help shape your world! 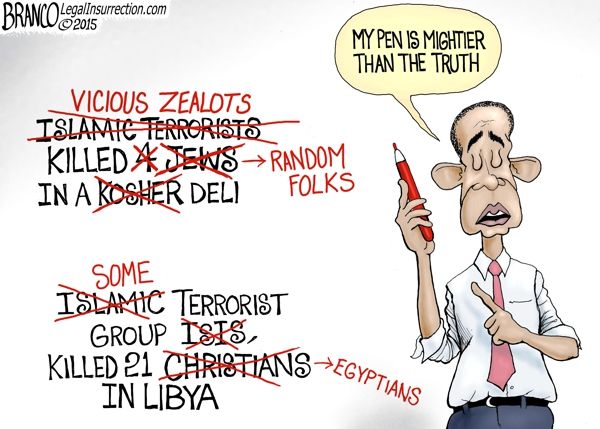