What do you picture when you think of the typical American family? If you’re like most people, it usually conjures up the image of mom, dad, their two kids and that white picket fence. The family of our grandparent’s generation, where mom and dad raised the kids in a married relationship, and the kids all had the same father! Many will point out, even then, most families weren’t in idyllic bliss by any means, couples still fought, dysfunctional addicts who couldn’t raise their own, jailbirds, illegitimate children and infidelity were there back then too. However, this does not mean that such things were publicly accepted. These things were spoken of in hushed tones, not advertised as “just another family”! The traditional family was still the ideal, and what everyone who was respectable tried to emulate.

Nowadays, this traditional family structure has given way to all sorts of strange combinations, from same-sex parents, to single moms or even dads, to blended families, families where the kids have to be raised by their grandparents because their parents are unfit, parents in jail, bitter divorces, mom with “live in” boyfriend, and broken homes. Many liberal feminists and other PC proponents call such non traditional families “progress” and that now, we can accept all sorts of families! However, the evidence is in favor for the traditional family, one of a married mom and dad, and children born in wedlock. Children from those types of families do better psychologically, and are less likely to be broken homes. While many psychologists and sociologists concede to that conclusion, others, to be politically correct and not “offend” the other types of families downplay the statistics in favor of “acceptance”. But, acceptance of what? The disintegration of the stable home? The welfare state? Parents who can’t get their act together and raise their own children? Children with no father figures?

Often, these non traditional families lack many aspects that the nuclear family has to give children. For example, single parent homes, such as with single mothers, there is no father figure to guide the development of a son into a man, and guide a daughter to know how a man should treat her in the future, and become a lady of standards. With single dads, there is no motherly influence to guide a daughter to become a whole woman, nor how to teach a son to treat women. In both cases, there simply is no perspective that only the other gender can give. Same with same-sex parents. While I am not against gay marriage for most ethical reasons, this particular case I do oppose. Parents of one single sex cannot give the perspective of the other sex to their children and are basically like single parent homes in that sense.

Divorced homes are broken homes. Plain and simple. While divorce is extreme cases is warranted, such as physical abuse and completely toxic relationships with no reconciliation, often times it is for less serious charges, such as being “tired” of one’s partner and wanting something else. These parents act like juvenile teenagers: “I can break up with my spouse if I want to! We’re adults and no one can tells us no…” . However, they fail to realize that when you have kids, it’s not about you anymore. You are not young people, free to break up and throw away your partner on a whim anymore. Not to mention, there is plenty of statistics on the deep psychological scars from being raised in a divorced home.  The new boyfriend or girlfriend will never be your child’s mother or father. Often, the kids resent them, but you just won’t listen since you think it’s all about you and your “right” to throw away the foundation of stability your kids were once in. Indeed, “live in” boyfriends are no fathers, often, many have been found out to have contempt for and even abuse the children! If he doesn’t want to marry you, he doesn’t want to commit to raising your kids with you.

Infidelity, toxic relationships, domestic abuse, etc.. while there in our grandparent’s generations, were never so destigmatized and accepted to be seen in the open as in today’s “hook up” culture. Marriage and the sanctity of marriage means nothing anymore. Now, both sides see fit to throw away their vows and forsake their promise “till death do us part”. In the case of childless couples, it’s one thing, but when children are in the mix, they suffer as their family is ripped apart, and loyalties are divided. It is a great shame, that more of my classmates throughout school were in single parent divorced families than in happily married two parent homes like myself. Maybe one or two other kids, but that was it per class. It is indeed quite the anomaly, that my family has had many generations of stable marriages lasting lifetimes, on both sides of the family!

Why is this not the norm anymore? Why are there so many broken homes, from single parents, to divorced parents, to the devaluing of fathers and lack of accountability? Why are more and more kids being raised by grandma and grandpa, instead of mommy and daddy? Custody battles, restraining orders, CPS calls by teachers, it was never this bad! The “modern” “progressive” family is now one of non-commitment, absent fathers, two mommies, two daddies, two houses, bastard children, grandparents as parents, live in boyfriends, not to mention plenty on welfare! It is politically correct to accept all these sorry scenarios, in favor of “every family is a real family”, but the only reality these families give, is one of years in a therapist’s office!

The traditional family from the 50’s, while “old school”, has worked raising stable and loving children who went on to make more. Why fix what was never broken? They say they want other situations destigmatized, but does anyone think, maybe such detrimental and dysfunctional arrangements should get their just stigma. What our families look like says a great deal about our society. In this “any thing goes” society, apparently so does the family! I was fortunate to come from a family with generations of love and devotion, where marriage was honored above all, and children grew up with two loving parents, mom and dad. Why is the nuclear family forsaken for politically correct monstrosities? Ladies, demand that your family will be the best it can be: with stable marriages, devoted fathers, and children born from wedlock. Why can’t we strive for the families our grandparents had, the families our country cherished once, the families our children grew up in happiness and stability?  It’s not just what you want anymore, as they always said in the days of the nuclear family, “Think of the children!” 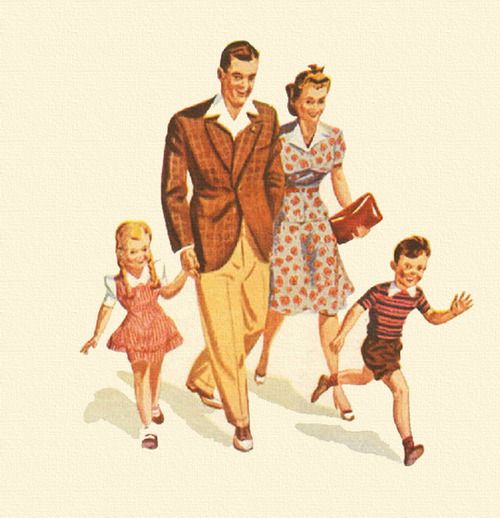 3 thoughts on “The Disintegration Of The Nuclear Family”