The Left often purports to be the party of egalitarianism… Anti-racist, anti sexist, the party of “tolerance” etc… etc… and yet, they have been proven time and time again to show they themselves display some of the most blatantly racist, sexist and intolerant ways of thought and action to groups they deem “less than”. However a less talked about aspect of this lies in another domain: prejudice and stereotyping based on socioeconomic status, in other words, classism.

You probably hear the Left saying how they want to dismantle social and economic inequality such as lessening the poverty gap and stopping rich elites from getting their privileges at the expense of everyone else. They may even talk about doing away with capitalism which to them, is the “enemy”! They say they are for the common man and woman, and yet, their true actions like much of what they do show through the facade of their utopic plans…

I would argue that on many counts, they are actually quite classist and demean the common man and woman and especially blue collar families. They say they want all these benefits to blue collar workers such as higher wages, more worker’s rights, more opportunities to advance, and yet, characterize them as these stupid ignoramuses! The Leftist politicians who come from wealth and privilege talk about how billionaires shouldn’t exist while raking in millions of dollars and living a lifestyle of gated communities, private jets, designer clothes, etc… and saying how they came from humble roots when in fact, they have always known privileges the common man and woman have not. Apparently this blatant hypocrisy is supposed to have gone over our heads and lead us to believe they were just like us! They treat us like low information voters, “sheeple” if you will, who will vote however they ideologically herd us.

Not to mention, they only care about the poor and blue collar they pick and choose, like the cradle to grave welfare leech who won’t work and lives off what others work to earn all their lives, or the illegal coming into the country to get those illicit votes. The Left “cares” about them, yet tells the blue collar worker earning his own wage he’s a “racist” for daring to ask why he has to earn his living and support his family when others who can work are supported through his salary. Regular blue collar folks, especially white families who are working poor or blue collar, and even middle class in some cases are seen as invisible to the supposed “benefits” the Left wants to hand out.

However the greatest example of the Left’s classist attitudes comes out when stereotyping who a conservative is. The stereotype of the average conservative in the Left’s mind is a white blue collar or middle class family. The people in what they call “Middle America” especially. Basically characterized as ignorant, backwards, uneducated hicks! Blind to their “white privilege” despite the fact they’re struggling to make ends meet, pay their bills, support their families, send their kids to college for a leg up in life etc… and dare to then question why these families are bitter over the cradle to grave welfare recipients and illegals who are getting free or subsidized healthcare, college, food, and such while they must earn everything they ever have.

There is also the incredibly insulting classist stereotype as well that these “deplorables” as Hillary called them, that can only be explained as the poorer and blue collar people having this mindset of anti-intellectualism or not wanting to better themselves socially and economically. This idea that while these families may come off as “upright” and have wholesome family values, that is rich in morals but little else, they have settled into their lot in life as lower wage workers without thinking of advancing themselves up the social ladder. While being seen as having wholesome values is a positive thing in itself, like the black people as athletic stereotype, it implies negatively that they are not smart or educated so while not directly negative, has a negative insinuation inherent in the stereotype. Using the language from a class I took once, the Left stereotypes the common man and woman as high in warmth but low in competence. Whereas I think why not see them as both? Related to the “wholesome values” stereotype, an extra-negative spin on this is that their values are actually very narrow minded and excludes others whereas the Left of course, has more tolerant and “inclusive” value systems. In essence, these common men and women are actually very narrow minded and excluding of those unlike them as well rejecting more “enlightened” values and goals of advancement.

The most stinging and hurtful stereotype to me personally at least is the one relating to anti-intellectualism. My family background is mainly blue collar. My grandparents on both sides came from poor immigrant families with nothing, who worked their way up to gain whatever social and economic capital my family has today. My grandpa was a factory worker and my grandma was a house cleaner who dropped out of high school. My other grandma was raised in the Mid West in a farming family who had to grow everything they had in the depression. However due to their sacrifices and saving, both of my parents had the chance to go to college and one to go even further to earn a master’s degree. I have been able to have an easy path to college and higher education and a comfortable middle class lifestyle because of their hard work. My family prized education and sought after it themselves. My maternal great-grandpa fought to keep my grandmother in school after 8th grade even though they told her to drop out as “she’d marry anyways”. My paternal grandpa got his college degree in his 70’s as he never had the chance in his youth but he believed it was never too late to better oneself. I have always been encouraged to prize academics and college was the default plan for me since infancy. I personally always identified as an intellectual who loves to think deeply and critically and pursue a love of the sciences from a young age of my own volition. I look up to the high powered professionals; scholars, scientists, doctors, professors,  researchers etc… I hope to be among their circles in a professional career where I use my mind everyday.

So you can guess why then it is a very personal thing to me to be stereotyped as seen as an anti-intellectual or of some mindset to not go above my social class because of my family’s middle class and blue collar roots and especially as a conservative. My family is made up of common men and women who are not rich elitists and value common sense and street smarts as well as prize education and opportunity for advancement up the social ladder. And they also are conservative. The most shocking thing is though, even more middle class intellectuals and people with higher degrees from a more humble background are starting to think of people from similar backgrounds with that snobbery and disdain as well! For example a professor I once had came from a blue collar working conservative family but had nothing but disdain for Trump supporting conservatives and his blue collar gun-owning father once he got a PhD and entered academic circles. Maybe it’s like the Left’s internalized prejudice concept where the oppressed group internalizes the message they’re inferior.

It’s incredibly alienating to feel that my future colleagues if they knew I’m conservative would characterize me as some backwards anti-intellectual ignoramus! Or to think if I chose a career in the sciences they would think me anti-science because they also stereotype conservatives as anti-science. Or because of the fact I embrace reality instead of “your reality” that means I’d be cold and insensitive as a psychologist. Or because I do think some cultures have more backward values that I believe ours should not embrace or let in the country I’d make a lousy anthropologist. Or because some conservatives don’t accept the theory of evolution they think I wouldn’t either. Or even in the intellectual secular community them not able to reconcile the fact I can indeed be a conservative without religion.

Many conservatives are great academics, smart, intellectual and critical thinkers, they just don’t get the chance to shine among their radical Leftist colleagues. Many are from blue collar working class backgrounds but are far from anti-intellectual ignorant hicks or of a closed mindset in terms of bettering themselves and their children. Intellect can be made of many dimensions, book smart being just one. Common sense goes a long way too and you don’t need letters after your name to:

Want your country and its people to be put first by its leader.

Want your children to be in safe neighborhoods instead of sanctuary cities overrun by criminals and leeches.

Want to raise your daughter to be a lady and son to be a traditional man.

Want to be proactive about the dangers in life, and live in the world as it is, not just what it should be like.

Want real protection in the hands of the common man and woman to protect against the next mass tragedy.

Want to stand up for your heritage and culture and not let everyone else erase and smother the values that give the country its reputation in the free world.

Want your hard work rewarded and others to earn their way as you had to.

Want the truth, not “fake news” and propaganda and lies assuming you are a low information voter.

Want to be known as something more than a “deplorable”.

Amazing it took what many would consider a rich elitist to keep the promises America wanted, really speak to the common man and woman, and help make the country great again… 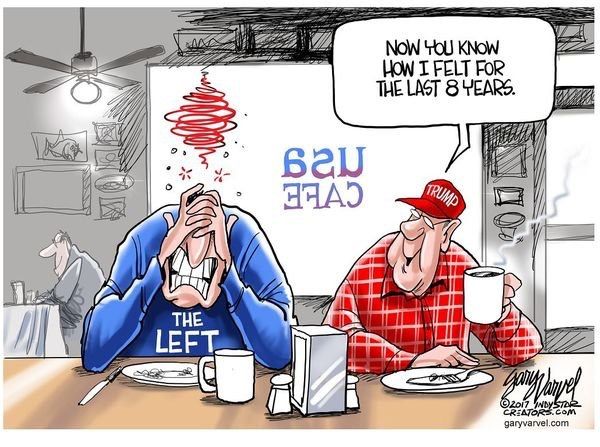