I See You, but Do You See Me?: A Critique of the Left’s “Representation”

The issue which the Left calls “representation” has become a wider social phenomenon. It’s basic essence is to “represent” different groups, often racial minorities, but other groups sometimes as well such as women, different body types, disabilities, conditions, etc… in things such as movies and TV, literature, advertising, etc… to show a positive portrayal of those groups and that they are seen and matter in society. An often cited reason for its importance in addition to those, is to send a message to the next generation that people who look like them matter and can be role models and achieve everything anyone else can. They cite the importance of being able to “see yourself” in popular culture, ads, and such as if you don’t you feel marginalized or ostracized from society.

This may surprise many on the Left, but I’m not necessarily against this idea. Granted due to much that is utter lunacy coming from the Left’s collective hive mind, I look anything they say is good now with a huge grain of salt, however I thought about the idea of representation and thought that its core premise was a good one. I too have felt the relief, or the sense of belonging from “seeing myself” with other people. I honestly think that’s an innate human desire, to want to be around others that look like you, as a sense of belonging. Letting others also feel a sense of belonging in society is a good thing overall. Also, it is good for others to see you as a multidimensional person, and not just a stereotype or comedic foil, or some bad guy. Simply letting others see you as human, just like them.

However, this idea is not without criticism from me too. I agree with its most basic premise, but there are some messages mixed in with the positive messages that take away from representation’s ultimate goal. The first is regarding motives for having a more “diverse” character, or advertisement for instance. If a story can be told with characters where race is irrelevant, thus anyone can be any race and still make sense, then a multi-racial cast isn’t an issue for me. Same for advertising targeted at everyone. The issue starts where one race is deliberately substituted for another to push some agenda, such as a superficial diversity quota, or in essence, the “token minority” which to me in itself is insulting and belittling. For example, some stories traditionally from European culture who naturally would feature white characters were substituted with other races in which they historically were not present in the society at the time the story was written and the story clearly described the character as European.

“Re-writing” such a story with a different racial character then is not representation, but erasure of the original group’s ethnicity or race in their story about their people. To grasp the absurdity, imagine a traditional African folk story, or a Native American one, only all the characters re-cast as white people! Would you cast white people nowadays to play what originally was a role for a minority character? If not anymore, then why recast a white character as a minority, for example, when remaking another author’s work who originally created the physical description of the characters in their story? As “white washing” is a common accusation for movies and TV by the Left, erasing traditionally white characters recast as a minority does the same thing, only in reverse. Yes, sometimes people take creative licence to “cleverly” remake a story to have a new angle, but it’s really not so “creative” if your only motivation is to be more “woke”!

Same for gender. If you wouldn’t make an originally female character male, then don’t erase a male character in the name of feminism! And speaking as a woman, it insults women who can achieve great things in real life regardless of their gender, when you feel the need to artificially create women characters to achieve things for a superficial “token high-achieving woman” just to push a feminist narrative rather than have a strong female character emphasize her persistence, intelligence and work ethic as a human, and not just because she’s a woman. Also like many other edicts by the Left, it only seems to go one way: White people and men are frequently erased out of the mainstream media and such for minorities and women. What messages does that send to those groups about their value in society? True equality will be when things like race or gender are seen as irrelevant to a person’s ultimate success and potential. Representing everyone means everyone, not just your special interest groups.

My other major critique of representation by the Left is how strongly focused it is on physical appearance or physical aspects of oneself. I think that also sends a harmful message in that it implicitly says that what really matters in belonging is what you look like, rather than the values you have or what sort of person you are on the inside. You are not limited to only looking up to people who happen to look like you do. Isn’t that what “diversity” was supposed to be about? About relating to and gaining positive takeaways from others who are different than yourself? The idea a person of color can only truly gain inspiration from someone the same race as themselves, or girls only being able to be inspired by women is just as absurd as white people only being able to see white people as a role model or boys only seeing men as a role model for their future aspirations even if women have achieved what they want to in their futures as well. Some of the most influential people in my life and from history don’t look like me in terms of race or gender. What I truly care about is their ideas, their brilliance, and their success.

Which leads me to this point: What about ideological representation? Especially for groups the Left overlooks or doesn’t seem to want to represent. I know the importance of being “seen” by society and the sense of belonging in seeing people like myself firsthand. But for me that more importantly includes people who not merely look like me but think like me. Ideologically, the Left dominates the mainstream media and literature. Conservatives are often reduced to a stereotype of an ignorant hick, or an outdated bigot, or used for a comedic foil in contrast to more “woke” characters. Shows like the Rosanne reboot tried to make a more well rounded portrayal of  conservatives as human and multidimensional. We need more like that who portray conservatives as fully human, with real and complex motivations behind their opinions even so if you still disagree, you can understand why they may feel as they do, rather than imply it’s “because they’re bigots!”. After all, what messages does the next generation absorb when they see people who think like their parents, friends or relatives mocked and derided for their beliefs? What do you think they’ll think if they dare explore those ideas which are mocked, satirized, and demonized for themselves? Why not a positive multidimensional portrayal of a conservative? A devout Christian family? A pro-life character? What about representation for conservative women? Conservatives of color as well? Conservatives are not just one gender or phenotype either! This doesn’t mean you can’t have any liberal characters, or criticize conservative ideas, it just means giving the other side fair and equal representation too free of the stereotypes and mockery you wouldn’t like to see people who think like you subjected to.

Ideological representation also is especially significant in representation within academia, where the usual focus has been on physical appearance or gender. There’s a need for academics, scientists, researchers, scholars etc… of color or women, says the Left, even to the point of deliberately excluding white male academics from the table such as at conferences, or whose research gets to be displayed or whose ideas get to be featured as a growth in the discipline. However, needless to say that too discredits the actual achievements of women scholars or scholars of color by focusing on their phenotype as the main important focus rather than the merits of their ideas in of themselves, we need ideological representation within academia as well, not just physical! What about works by conservative leaning authors being featured? Or more conservative professors in higher education, or letting conservative students have a voice in class? What about featuring research whose implications support conservative ideas ? Research in of itself should be politically neutral and impartially carried out, but the implications for many findings are used quite often to influence policies with ideological and political impacts, and we need more than just one side’s perspective on how we use those conclusions.

Representation is good in its basic premise, but carried out in a way that has many major flaws sending mixed messages. Physical characteristics are not the most important thing in deciding if you belong, or who you can look up to. Nor is the idea that you can only truly relate to those who look just like you. More significantly, it like many other things the Left likes to do, is a one way street. Represent who we want, but not anyone else. The erasure of positive portrayals of conservatives, white people from their own narratives, men being substituted for women for no other reason other than to be “woke” for examples. This hypocrisy and double standards ultimately erodes the vast majority of the positive messages representation entails. Representation overall can be a very positive force, but when it’s done for the right reasons, not just some superficial agenda to push, and when it’s done for EVERYONE, not just who you pick and choose deserves to be represented in society. 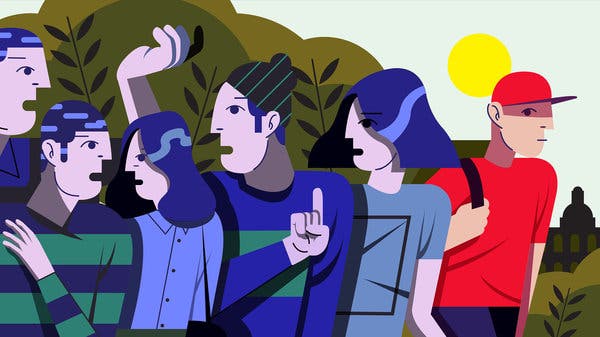