Every year for awhile now, instead of thoughts of delicious food and giving thanks for our blessings, Thanksgiving brings up the usual standard SJW arguments about the persecution of First Nations tribes and before you know it, your happy annual dinner has devolved into a verbal fight, and worse, possibly a food fight!

It’s understandable for those who aren’t fully educated in the history of Thanksgiving to completely misunderstand the holiday and what it commemorates. They’ve been taught that the landing of the Pilgrims on Plymouth Rock was the beginning of 400 years of native oppression. But with a bit of education about the holiday and what it actually stands for, it suddenly becomes clear what they’re sorely missing.

I have the good fortune of being a direct descendant of Governor William Bradford, the first Guest of Honor at the first Thanksgiving, so the history of the Pilgrims is also my family history. My 11th great grandfather was the man who led the Pilgrims from England in search of a land where they would be free to practice their Puritan religion, which was frowned upon in England. Plus, they sought a place where they could live free of the decadent influences of their homeland. After trying out life in Amsterdam first, a lack of money led to the Pilgrims taking an offer of free transport and funding if they’d come to the New World and begin taming the wild land that would become the United States of America.

Unused to roughing it and trying to scrabble a living from virgin land, and supply missions from England being subject to delays, they found a friend in the Wampanoag Indians, who taught them what crops they could grow in the New England soil and helped them to hunt for food. In recognition of the great cooperation that had begun between the two cultures, they held a great feast of Thanksgiving for all the blessings they’d found, including their new allies. They even struck a treaty to protect each other against other raiding tribes!

So, how did a holiday built upon the cooperation of two cultures become the symbol of genocide? Especially after the colonies relied on some native tribes for their assistance in the Revolutionary War, and even more so after settlers began intermarrying with Indians! For all intents and purposes, the two cultures seemed destined to continue this great relationship.

For that answer, we need to fast forward a few centuries till we get to the first ostensibly Democrat president named Andrew Jackson. He and his party, the Democrat-Republicans (which became just Democrats after the Civil War), created the Indian Removal Act of 1830 that began forcing Native Tribes off their ancestral lands and onto reservations. This was done in an effort to give the government more land they could sell to settlers, and there was nothing they wouldn’t do to make a buck, including doing such dirty, underhanded tricks as giving tribes blankets that carried the smallpox virus. So not only did the Democrat Party start the genocide against First Nations peoples, but they did it for MONEY.

In light of the actual history of America’s treatment of Native Tribes, it is clear that the people who established the holiday of Thanksgiving had no responsibility for the choices our government made two centuries AFTER the inaugurating event. The first Thanksgiving was exactly what it was called, a day of giving thanks for your blessings, which the Pilgrims considered the Wampanoag to be one of their greatest gifts from God and thus honoured them by having them be full participants in the day. It was an event that never would’ve happened that first year without their help.

Thanksgiving was established as a national holiday by President Abraham Lincoln in 1863 following the pivotal, and very bloody, Battle of Gettysburg. He wanted to give America a day in which they could join with their families and give thanks to Providence for all their blessings. It was an chance for the country to heal following the end of the war, not to mention the former slaves who had been freed from bondage. Ultimately, Thanksgiving was created as an equal opportunity holiday that was built upon the idea of different peoples coming together to create this great country. It was intended to not just bring families together, but to bring the entire country together after so much strife.

It is easy to blame the past for not being more “woke”, and to load up all national events with sinister intentions based on the cumulative outcome of another generation’s actions, but the new relationship that had begun between the two cultures that gathered to give thanks that original day in 1631 had nothing to do with what happened later on. Anyone who assigns such evil portents on a day when we, too, might show our appreciation to Providence for all we have received, is merely looking to destroy the most positive of holidays that actually highlights the spirit of cooperation between two 17th Century cultures, not the eventual result of 19th Century Democrat expansion.

Excellent points Time Foolery! I’ve mentioned time and time again how it’s not really about getting some form of restorative justice, but merely push an agenda using cherry picked history as an excuse. They do that with Columbus Day too, despite Columbus never having any direct contact with any Native Americans in the present day US! Then again, the Left is often the epitome of ingratitude when it comes to appreciating America and its values… 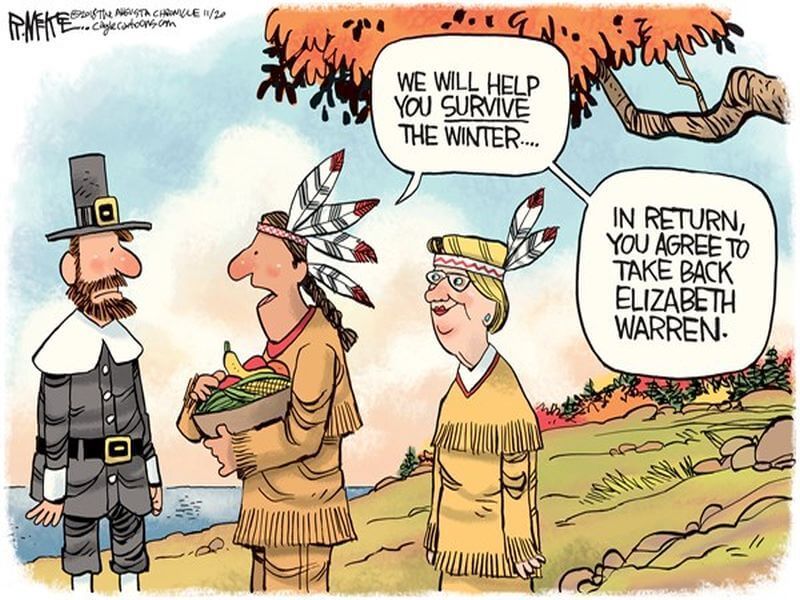