A Columbus Day PSA: There are Two Sides to Every Story… Good AND Bad!

I heard your arguments about how Columbus Day allegedly celebrates the genocide of Native Americans, and that celebrating it is a “form of white supremacy”. Honestly I can’t say I agree with such extreme views, but I also understand history is a messy thing, and Columbus was no saint either! Let’s get something cleared up:

I don’t celebrate the destruction of any culture, much less genocide! I don’t agree with the historical practice that forced many Native Americans to abandon their own cultural heritage, yet also don’t oppose the idea of them learning Euro-American ways as well so they could have been in both worlds. Nor do I agree with everything the government did in the past in regards to them. I honestly find it sad so many native languages are extinct and are becoming extinct as well as culture due to the past policies of assimilation.

However, I ALSO don’t agree with Native Americans historically killing, raiding, raping and scalping settlers either! I condemn the barbarity of their side as well, and it is documented that many tribes were just as bloodthirsty and imperialistic as the Europeans! In Columbus’s day and in the “Wild West” of US history. Many argue European colonizers, including America treated the Natives as if they were sub-human and say that Columbus Day strips them of their humanity by portraying them as “savages”. I agree with you that “Native Americans are human too”, but that goes both ways: Being fully human means having human nature. For good and bad. The other side of the extreme is pretending the Native Americans were on some moral high ground just because white people with better technology conquered them. Better technology does not mean greater moral evil though in terms of intentions. Yes, you could kill more with the “guns, germs and steel”, but it does not make your intentions more evil simply because you can produce a higher body count! Native American tribes were ruthless conquerors who while showing occasional mercy on a captive, more often tortured them and enslaved them, whether White or Native. No, they did not have the same technology as Europeans or Americans, but they had that same all too human lust for conquest, land, prestige and yes, power.

Columbus and future conquerors of the New World were brutal conquerors who did enslave and oppress their weaker adversaries. No one is denying that and saying they were some “woke” culturally sensitive saviors! But you know what? That is the nature of conquest. Political and social oppression and a more powerful conquering group. That’s how it’s been for all of human history. The ugly truth is, EVERY HUMAN GROUP did it to their fellow man. I do not deny the ugliness of the European conquests on the New world peoples. But it is a blatant double standard to condemn Europe and America for doing it, yet turn a blind eye to the indigenous peoples who conquered and oppressed their fellow natives of other tribes. In fact, many native endonyms mean “the people” or “Human Beings”, implying they alone are the real people, everyone else is sub-human! Maybe you’re right we shouldn’t necessarily celebrate or gloss over all the bad Columbus did, but don’t paint Native Americans as some “noble savage” when they too have lusted for land, resources and power and oppressed their adversaries to take their land away from them. History is too nuanced and messy to honestly be reduced to black and white, good vs. evil scenarios. If you want to re-name Columbus Day “Indigenous People’s Day”, you’re merely replacing one conqueror for another.

Another thing: Much of the issue revolves around Native Americans in the US complaining about their treatment by the government in the 1800’s. However, what land Columbus discovered was not part of the continental United States at all and we’re talking about the 15th century, not the 19th century! So what do current Native American grievances with the US have to do with some 15th century Italian who never clapped eyes on a US Native American tribe? Yeah yeah…. He was one of the first to introduce Europeans to the New World leading to other conquests, but don’t act like it’s a personal grievance when he never was within thousands of miles from your “native” lands your tribe (which may have not even existed yet) conquered from some previous one! If you do that it comes off like you are in it to push an agenda more than historical relevance.

Last point, I find these anti-Columbus day sentiments to be part of a wider troubling trend to condemn any historical figure for not having modern views, or acting according to how we would. In addition, the troubling double standard where Western Civilization in general is condemned and derided without also seeing the positives yet other cultures get off the hook for similar atrocities. Both are flawed and detrimental for anyone who wants a fair and balanced view of the good and bad of history and examining our own culture. No people, person or society is solely good as every country and human group has skeletons in their closets. However, no one is all bad. Including historical figures like Columbus or Western Civilization. It is possible, I will argue to celebrate the good of the West, such as the foundation of a country in North America built on democracy and freedom, as well as great leaps of science and technology and better standards of living today, while also acknowledging that brutality and oppression were done on both sides and no one is truly “innocent” or “guilty” in the big picture for history and the human condition.

Not to mention, we act within our cultural matrix. What we find acceptable to do is determined by our culture and so was Columbus and all the other New World conquerors. It was a brutal world, void of (gasp!) wokeness and “diversity training”, and conquest and assimilation was the accepted practice of the day in the 15th century, just as ideologies of cultural tolerance are for the 21st century. Is it fair to condemn a person for doing what was acceptable in their own culture and time frame? We do not by any means, have to personally agree with what they did or how they thought, but think about this: Who will condemn some attitude YOU have centuries in the future and would you find it fair for them to hold you to their future standards posthumously???

Columbus day is not about celebrating violent genocide and oppression, despite the fact it happened, but about celebrating the discovery of a new land full of new possibilities. The negatives do not have to negate the positives worth celebrating. I understand that may not be your side of the story, but we are celebrating ours. Columbus Day doesn’t have to be your holiday if you find nothing worth celebrating, but don’t demand those who do find something to celebrate in it to stop just because you don’t. England is not entitled to force us to stop celebrating the 4th of July just because it was their defeat. There are two sides to every story, including our side.

—A Lady of Reason 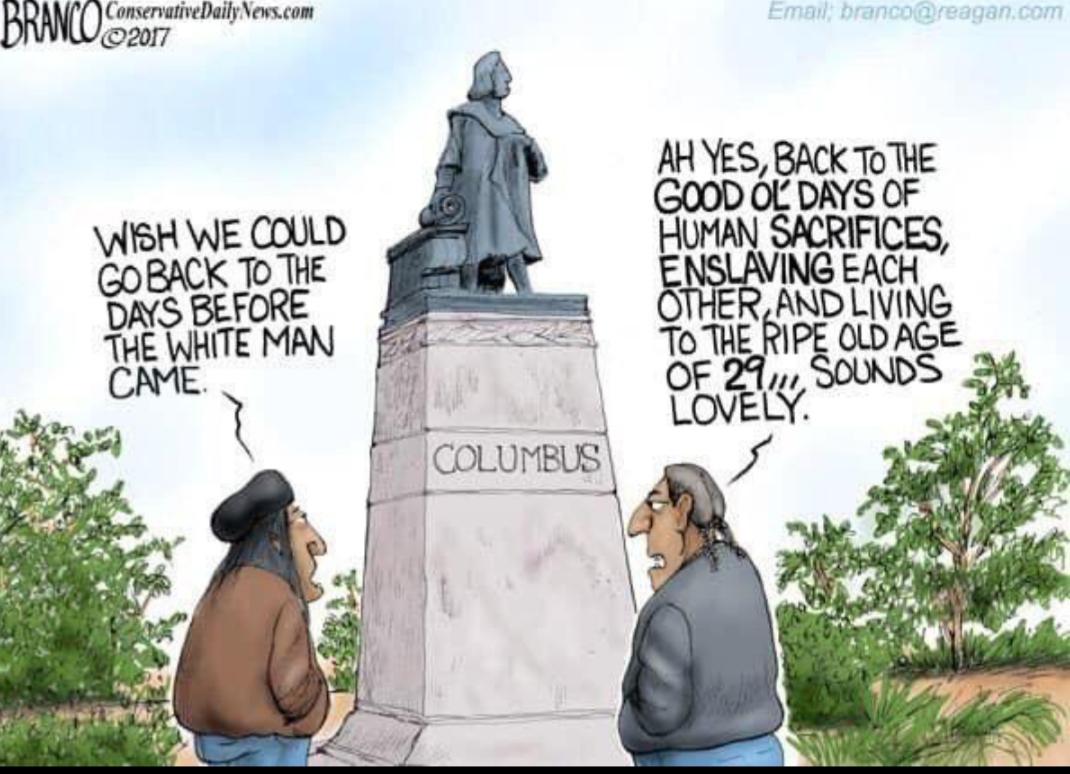