Needless to say I disagree with much of what you say, mainly that while we all must be cognizant of the impact we make on our planet, there is not much evidence the world which has weathered countless shifts in climate and atmospheric conditions, is going to end as people like AOC predicts within a decade or so. However, what inspired this open letter to you is not specifically to refute or rebuke your climate activism, but to draw attention to a much bigger issue: Youth and the Left’s indoctrination.

The thing that resonated with me about young people, teenagers like yourself is the nature of some of the backlash you’ve been getting in regards to your age. Many argue you are too young to make coherent arguments or that what you say is your own words and not the words of some other adult. However for the sake of argument I’ll give you the benefit of the doubt and assume everything you wrote and said is of your own volition and creation. Believe it or not, I happen to disagree with some who say that you can’t possibly comprehend the arguments you make or the words you use because of your age.

See, I’m not too far removed from the feeling of being underestimated and dismissed due to being a teenager or young adult. I’m not a teenager anymore, but the memories still sting as someone who was somewhat above their age in vocabulary, writing and reasoning in many aspects as a child and teenager. I’ve had intellectual interests atypical of the average teen and was aware of bigger social issues at younger ages than most. So I personally know that young people can be articulate, intelligent, socially aware, capable and driven as any adult.

I also have known many others who were all of those things too and excelled in school and genuinely cared about their intellectual growth and aspirations. Luckily many of the adults around me encouraged and believed in my capabilities, but the ones who dismissed me still hurt me to this day. I do believe that at age 16, it is possible to have adult like intellectual maturity and present oneself in an articulate manner on an issue and that young people like yourself are more than capable. Just look at all the conservative youth such as CJ Pearson rising now who are articulate and mature. Your youth doesn’t disqualify you from having a valid argument or opinion, but it doesn’t shield you from criticism either. An idea is flawed or not flawed regardless if the person purporting it is 10 or 100.

Do I think you’re just lying? Not necessarily. I believe that you are truly convinced of your position, and your passion is genuine. However, you are part of a system that brainwashed you to the far Left from day one. Your schooling, society, authority figures, etc… guided you in the ideological direction you are going down now. Of course you don’t believe it, as well as countless other young people but the fact is you were educated in an educational system that only taught one side. A system that told you and others that conservative ideas, politics and values are the antithesis of progress, science, good policies, and even basic kindness and humanity. A system that taught you that conservative people are bigoted, intolerant, impervious to facts and ignorant and that anyone who sympathizes with conservative opinions are to be ridiculed and demonized. You may be genuine in your convictions, but you are still a pawn for the Left in that their views are the only ones you were ever taught as valid. They now can use you to further their agenda as the new young face of the Left, the polar opposite to the “old white man” Trump is. Deep down, I think young activists like yourself have the capacity for deep thought and genuine conviction, but simply have not been given the tools to foster your critical thinking.

The passion’s there, but the facts are not. No one doubts that the Parkland activists show passion for their cause and indeed have direct personal experience. However, their ideas about the best way to stop shootings are deeply flawed and take guns away from those who can defend themselves and others. If you have only been shown one side, you can’t truly understand the issue at hand. You can’t foster critical thinking skills with only one side of argument, yet that’s what the public school system has done, as well as society. Teens can be very capable intellectually, but they need to have been given the tools and mentorship to learn the art of thinking critically, which countless young people have not been.

Another point is, many on the Left criticize conservatives “attacking” you for your youth. Thing is, many are simply refuting your ideas, and expressing the fact that you’ve been brainwashed all your youth by the Left. You ask to be treated like an adult, so we are. Adults get criticism all the time, especially a public figure such as yourself. You can’t expect to be given pity points, or an intellectual free pass and be treated like an intellectually capable thinker. There are no safe spaces to hide in in the real world of adult ideas. I honestly feel sad you see the world as such a dismal place. The Left has tried to brainwash youth into thinking the world is literally going to end in a generation! Honestly, I’d give our planet more credit for its resilience in the face of change over its 4.6 billion year lifespan. (Also, your childhood was not “stolen”. Go to the nearest homeless shelter and ask those kids how their childhood’s going for them…)

You say you speak up because the adults have failed you, but on a related note, have you truly listened to them? Tried to understand their ideas or why they can’t do it the way you want it to be done? Many say youth can be idealistic, and unrealistic which is also very true. While intellectually capable of understanding, young people simply don’t have the same life experience as adults. You haven’t lived long enough to see what ideas have been proposed and worked or didn’t work. You haven’t been able to see over 40, 50, 60, 70, years etc… what politics has been like, whose promises came true and whose didn’t. Yes, we have a historical record, but you haven’t had a personal experience to develop your own intuition into when something’s a bit “off”.

Maybe some of the adults who allegedly “failed” you have seen similar claims come and go and think why should this time be special? I’m not saying teens are too dumb to understand the world, it’s simply a matter of life experience that one can only get by living longer. The world’s not all black and white, and even the most seemingly “simple” solution can have unintended consequences or flaws. Older people have made more mistakes than you and were able to learn from them thus tempering their idealism. I hope one day instead of viewing adults with contempt as negligent failures, you gain the wisdom they impart to you so you don’t have to make the same mistakes they did and gain a fast track to the wisdom they had to learn on their own. If it weren’t for my parents and conservative role models in my life, I’d be brainwashed too! They gave me the tools to think critically and resist the Left’s agenda.

Lastly, I do not oppose young people getting more involved in politics and various causes. I think it’s good to have an awareness outside yourself and your own immediate life and it is true that youth do inherit the future. I like many, are simply concerned that not all of it is youth driven, but driven by adults with agendas using young people as pawns. Or driven by youth without enough facts and experience in the issue at hand. Young people should be able to draw their own conclusions, but it’s impossible in an environment of brainwashing!

Think on this too: What concrete things are YOU personally doing to help change the environment? Beyond skipping class for a day, why not walk or bike to school? Carpool? Use energy saving lights. Cut down your carbon footprint in tangible ways if its so important to you. I’m not just saying this for you either, but to every kid who cut class last Friday! Why not go to school to LEARN ABOUT CLIMATE CHANGE rather than use the cause as a flimsy excuse to cut class if you all care so much? Trust me, you’re all no more PhD level environmentalists than I am…

I see a passionate driven young woman, but one that is misguided and has been brainwashed. The Left doesn’t want to empower youth like you, they just want to exploit your inexperience and your raw passion to steer you to their agenda. They don’t want to give youth the vote for example because they’re capable, but because they’re gullible. Same with giving youth a voice on their platform. Maybe an intelligent, capable and passionate person like yourself will one day realize this. 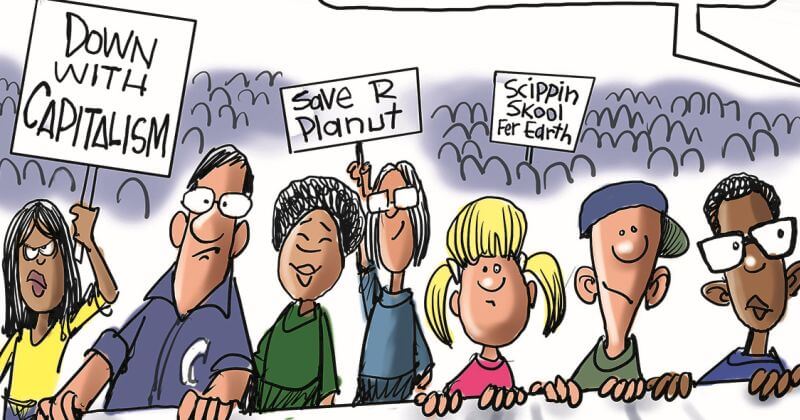 53 thoughts on “Dear Greta Thunberg and Others Like Her”