The recent tragedies such as the tragic El Paso shooting leave everyone outraged and yet, are twisted into partisan issues of Left vs. Right. The perpetrator is said to have written an alt-right manifesto desiring to kill immigrants. Now, he’s being used as evidence that conservatives are encouraging these vile acts through our stances on immigration and other issues. The same with the synagogue shooter, school shooters, and many others blaming lack of gun control. However, I don’t want to get into a gun control debate, rather a moral one.

To the Left, you want to blame conservatives for these acts of violence, saying your “enemy” the white male is to blame. It’s his white privilege, or his racism, or his toxic masculinity. You think we give white men a free pass while condemning people of color who do heinous acts. That we minimize it or even enable it and cheer them on. Well, I can tell you that can’t be further from the truth! Believe it or not, we’re just like you.

We have our own lives to live, with our families, our dreams, our goals, our biological desire to live as much as you do! Do you truly think we aren’t just as outraged when the next mass shooting occurs? Do you truly believe that we aren’t scared and appalled by the fact we can’t truly feel safe anymore sending our kids to school, going to the movies, going to concerts, going to our places of worship, even going to shop at Walmart…. 😦 This shooting struck me personally because I’m a fan of Walmart and go there all the time. It could have easily been me in that situation. Those mall shootings? I love the mall and am horrified to think I’m risking my life whenever I go have fun shopping!

Conservatives want to go to the movies, go to school, go to a concert, practice their religion, or simply pick up some items at the store just as much as you do without fear of dying or fear of a loved one going out to have some fun. How can you say we enable such things when they hurt us just as much as they hurt you? We speak of more guns not to be blind to their consequences only thinking of ourselves, but to have more armed citizens willing and ready to fight back to defend you and those you care about. We want solutions too. We want more than “thoughts and prayers” as well. Our solutions just aren’t in line with yours, but that does not mean we don’t care! We just want what DOES good rather than what FEELS good.

Another extremely important point is conservatives in no way shape or form condone or minimize violence driven by alt-right ideas. Those who commit vile acts in name of some so called “conservative” platforms are not real conservatives. No more that is, than you would say ISIS and Al-Qaeda are true Muslims like the every day Muslims in America, or the black thug reflects upon every black person in existence, or the illegal in MS-13 reflects on all Hispanic people.

Us having strong stances against open borders and illegal immigration draining our country in no way equals a desire to kill them!!! That’s a complete logical fallacy. It’s stating the obvious conservatives acknowlege their human right to life. We just don’t acknowlege their “right” to come here and leech off our country. Citing further examples, that synagogue shooting that happened does not mean conservatives were cheering and hate Jews when many conservatives are Jewish! Trump has family who are Jewish and openly condemned that and every other act of violence.

The white males who did these crimes are not who we are. We are not murderers who kill, threaten and terrorize to get our way. We are not terrorists whose only strategy is to bully people into submission. We are not the true racists who adore the Nazis and wish to repeat the Holocaust! They happen to be white males, but isn’t it absurd to think ALL white males are 1. conservative, and 2. feel entitled to kill based on conservative ideas? Keep in mind, this most recent shooter in El Paso was a registered Democrat… Now does that mean all Democrats are like him? Our rhetoric is not one of violence just because it takes a harder position on things. Speaking a blunt truth does not equate to a rallying cry for violence. The violence at places like Charlottesville, or those bombings of the Leftist leaders last fall do not reflect the even keeled conservative. Prominent conservatives have come out and condemned every act of violence as it happened. Also note, it’s contradictory to conservative philosophy to bully people into our views as true conservatives find our strength in our arguments, not threats!

Can the Left say the same? When violence occurs on their side? When the perpetrator was a person of color, an illegal, a religious fanatic? Who on the Left are speaking out against Antifa’s violence? Why are Left leaning towns stopping police from quelling Antifa mobs? I literally read several Leftists who endorse Antifa with one calling it “the immune system of Democracy” and stating in essence, that Antifa’s violence is justified since it’s against Fascists! Or what about the illegals who murder US citizens like Mollie Tibbetts? The fact he was an illegal who should have never been there to murder her and others like her is minimized by the Left. What about Congresswoman Omar saying “some people did something” in regards to the killing of 3000 innocent people during 9/11? You say the vast majority of Muslims condemn terrorism in the name of Islam yet why do we hear of so few Muslim leaders openly condemning terrorism? Including a Muslim congresswoman. Or the fact the Left-leaning media glosses over any violence by groups they are in favor with. You openly condemn a mosque or synagogue shooting, yet we can hear crickets when the church shooting happened. Or you decry white males for toxic masculinity or white privilege yet it’s “racist” to call out thugs in the inner city or the illegal who came here to murder.

Violence by lunatics on any side must be condemned by everyone! We condemned those police officers who wanted AOC shot. We clearly said they crossed a line and it was good they were fired as yet another example. ALL sides have fringed lunatics, but the loonies don’t reflect the mainstream. Why the double standard with the Left?

If Islamic terrorists are not who Muslims are….

If pedophile priests are not who Catholics are…

If Antifa is not who all Liberals are…

Racists, fascists, Nazis, xenophobes, misogynists, rapists, and mass shooters to name a few are NOT WHO WE ARE!!!! 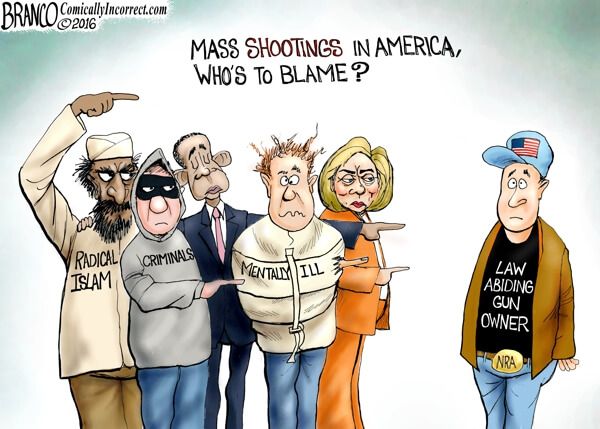