I’ve wanted to bring up this point for a while now: Sometimes it takes more work to get where you want than for another person.

Now, as obvious as this sounds to most people, apparently this is breaking news for the Left! Their beef is the fact that not everyone has that “even chance” in life. The most commonly cited examples being racial minorities or women. The Left argues that racial bias and prejudice has held back countless qualified employees, brilliant students and hard working people from reaping the deserved rewards for their hard work. The idea that even despite the civil rights movement and a bigger push for equality, racism is still rife and people will do anything to get around anti-discrimination laws leading to the system keeping racial minorities in poverty and trapped in a downward spiral. Instead of seeing many minority communities as represented by lawyers, doctors, CEO’s etc… they are seen as welfare leeches, criminals and a drain on society.

Women too, as gender is the other huge example they argue about face similar bias in the eyes of the Left. Women are dismissed, not taken seriously, looked upon as weak, incompetent, and unsuited for many lines of work traditionally done by men. However, the trends have changed as more and more women break the barriers once faced by women historically. Never the less, the Left still argues women only are paid 3/4 of what men are and are held back from reaching higher levels in their respective careers and limited in stereotypes of more “feminine” lines of work.

In both cases of race and gender, the idea is that those who fall in to either (or both!) don’t have the same chances of a white male in particular of landing a good career or getting into a good school. In the minds of the Left, the system keeps them trapped, and the idea that in America, you can work your way up in this life is a fantasy. Now, I don’t deny that gross inequalities have existed historically, and still exist in society. I understand that not everyone does have an even chance at life and success and the wider forces of society do influence all of us and what we’re able to achieve. However, the Left misses a very crucial other piece of the puzzle to success: The individual’s determination to get what they want.

I think the Left has created their own reality about the situation. They over attribute social factors negating personal ones and other factors that may have had the outcome of being held back. I’ve argued more in detail about the whys in previous posts, but for the sake of the argument I want to make let’s assume everything the Left says about “the system” keeping women and minorities down is true. So, to be clear here, the basic assumptions I am going off of are the ideas that racial minorities and women are kept back by society and that their race, gender or both have been the main factor in hindering their success in life.

However, who says race and gender are the only factors holding you back? Yep. Just because you weren’t hired you can automatically assume it had to be racially motivated, or because you’re a woman? What about factors such as social connections, family connections and networking? I personally have applied for many jobs where I had none of the above, and got the job. However, I’m sure I didn’t get the other 9 out of 10 I applied for because there was a shoe-in from within the company. Or the manager’s cousin needed work. Or I just didn’t know anyone who could put in a good word about me. Or in college, the professor running the research or that internship already knew another student well and liked their work while I came in as a complete stranger. College is the same! Ever heard of legacy admissions? 😉 Or the other family donated a ton of money to the school. Or the last spot was filled by the Dean’s nephew ahead of 20 other qualified students including you. You can’t rule out that factor if you have no connections for the job or the dream school you want no matter what your race or gender! You cant know for sure exactly why you didn’t make the cut, and if you lack connections of any kind, you can’t rule that out.

What about prior experience and qualifications? Yes, you might have a Master’s degree in business administration, but that company wants someone who worked in a bigger company or with a specific skill set. A college may not accept you if they want to fill some quota of different majors or clubs people are in. Maybe they wanted a more intense focus in specific types of community service. Just because you’re a female professor, or a professor of color doesn’t mean that’s the reason you didn’t get tenure. They might have wanted someone with different research concentrations. Or your class reviews went down this year. Or they have that shoe-in already no matter what you do to make yourself the most deserving. You would think jobs and schools would be transparent about such specific desires, but often times they’re not. I have applied to many opportunities without a strong history of past relevant experiences, and surprise, surprise, I wasn’t chosen. Am I entitled to jump to the conclusion it’s because I’m a woman despite my lack of relevant experience?

Now some might say, “but I did have a stellar resume, GPA, etc… and still didn’t get the job or into the school I wanted!” For that, I say see the paragraph on lack of connections, and consider the fact that as I just said, they might be looking for a specific thing you don’t have despite your experiences and qualifications. I had a strong academic record to bring to the table in my college application to my top choice school. However, I wasn’t accepted. Why? I don’t know exactly, but my guess is I didn’t have something else they wanted to bring to that next year’s class. However, a Y chromosome wasn’t my first guess! 😉 So in conclusion, there are other factors you need to consider before crying victim to racial or gender discrimination.

Even if you can eliminate those other factors in why you weren’t given the opportunity, and you can solidly conclude it was your race or gender, does that have to stop you? Maybe you do have to work twice as hard to prove yourself. Maybe you do have to put out more applications, follow up more, become more assertive in pursuing your career goals. Maybe you do need to prove to them your priority is with them, and not with what they assume it is. Is it fair you are under a microscope your colleagues or classmates are not? No! But is life fair 100% of the time for anyone? Maybe white guy down the hall isn’t getting promoted or is in danger of getting laid off because he doesn’t have connections despite being white and male, but you just don’t know his situation and assume he’s working his way up easily because of his skin color or his chromosomes when he might be under his own microscope too. Maybe you’re a minority, but have a degree, training, specific research, past relevant internships etc…the white person doesn’t giving you the edge on your resume when coming up for review.

Point is, regardless of if we get what we want or not, we all have a mixture of advantages and disadvantages that may include race and gender. I’m not saying there is no gender or racial bias out there. However, why is race and gender “extra special” and entitle you to cry victim over for example, someone who simply doesn’t have the right connections? You can argue, “but you have no control over race or gender”, but how much control do you have over whether or not you’re the manager’s cousin?

So what’s a person to do? You have to work harder than everyone else, exceed expectations, be held to a higher standard, and you can’t control your race or gender. The solution seems to be mind blowing to the Left: Instead of whining and demanding affirmative action programs and quotas, actually put in the extra work to get what you want. Yes. Outwork the next guy and if you have to work twice as hard, work twice as hard! If the world thinks you don’t look like what you want to be, don’t whine about how oppressed you are, prove them wrong by pushing hard to achieve your goals. You may need more patience. People might push back and try to limit you. Not hire you. Not admit you. You probably won’t get in as fast as a more “privileged” person. But will you let that stop you? And what if there is no one like you in your dream field? Well someone had to be the first woman/minority doctor, lawyer, researcher, PhD holder, engineer, etc…  Why can’t the next someone be you? Blaze the trail yourself if you want the path created. Our heroes we look up to in the history books all did in spite of the prejudice and bias.

If you give up, doesn’t that just let those whom you feel are keeping you down win? If you throw in the towel and don’t call back, stop applying, don’t push for what you want to do in life and say “Well, I’m a person of color/woman so I will never get where I want to be” then you gave up on yourself. Not the world. Is it fair you’re held back more than others for reasons you have no control over? No! But that’s reality. Don’t whine about wanting change, BE the change! Hurdles don’t mean a closed door. They just mean a door that’s a little harder to unlock. But there is a key. That key just means working harder than the other guy sometimes… All you need is to be given one chance for that door to open. It’s up to you to have the motivation to seek it out. You CAN go far in life, you just have to work a little harder sometimes 🙂

One final point: What about the fact that white males are passed over now due to affirmative action programs? Perhaps today being a woman or minority is now the advantage 😉 … 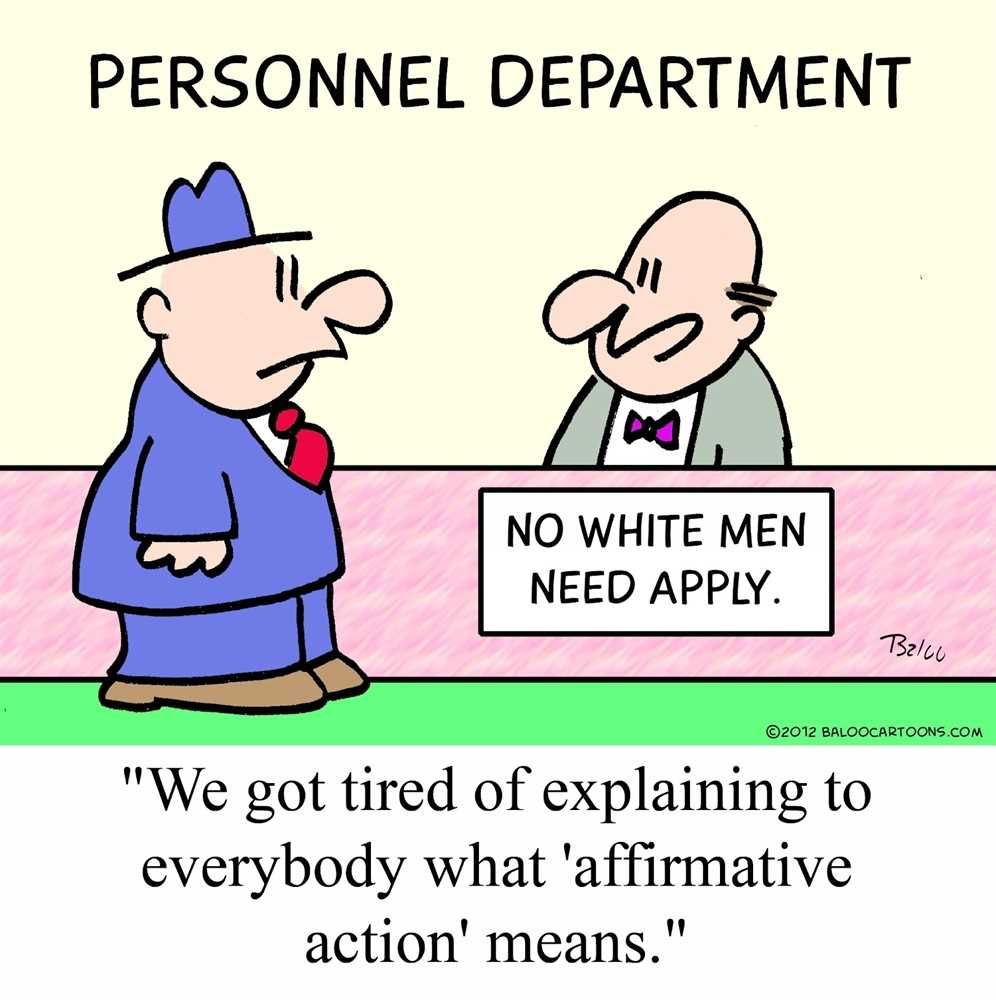 27 thoughts on “Yes, Sometimes You Have to Work Harder Than The Next Guy…”