A PSA to The Left: You Don’t Have to Like Trump, Just Don’t Go Nuts…

It’s me again… Another conservative out of many in this country. I’ve seen the way you’ve handled losing the 2016 election: With uncontrollable outrage and vitriol that hasn’t died down since the second you found out he got in. I’m impressed, honestly! I thought your tantrum would be old news and you would have simmered down within a month or so, but no! Two years and counting and coming up on the next election and all I can hear is “Racist!”, “Sexist!”, “Fascist!” etc… and of course, your favorite new slogan, “Impeach!!!”

Now you say Trump deserves it, Trump is special, he’s done so much harm… And in light of any substantial evidence, I too want my president and other authority figures held accountable for their actions. However, I fail to see any substantial evidence he has done something gravely wrong enough to impeach him for! Some locker room talk? You better shun every male friend and relative if you hold to the idea that no decent man ever bantered some off color comments with the boys in private! His ex wives and personal flings? Oh, yeah, because Trump is the first politician or rich celebrity to ever think of not being the perfect little angel! Shall we bring up the laundry list of politicians on the Left who have done wrong in their personal lives? Bill anyone? 😉 More importantly, how does that affect him carrying out his duties at President of The United States? We can argue Trump and other politicians too aren’t the greatest family men. Not 100% moral blemish free. Yes, some things can make me lose some measure of respect for people in their personal lives over flings and affairs. However, what really matters to me, what will affect me and the rest of the country is if the person in office honors his role in office and carries out all their duties they swore to do.

I know some of the more intricate political controversies over Trump have been extensively covered, and thus won’t go in to too much depth over what would require its own separate post! However, I will say that in light of the recent news about Muller’s report being released, the whole Russian collusion allegation concluded predictably 😉 Not much to see here, folks! In addition, countless other allegations have been brought up, then when proven false, silently gone out in the news cycle by Left leaning media, to be replaced with others, in what appears to be an attempt at grasping at straws.

If you were to ask me personally, and probably other conservatives too why they voted Trump, reasons given would be one, he’s making real change for the better. Our country was not in good shape, a bad economy, cheated in foreign policies, terrorism running rampant among others. The way we’ve been going under the past 8 years before hasn’t been working out… Nothing was being changed. We needed a new strategy, new ideas, and Trump had them. Knowing business from his past career, he knows how to negotiate, how to compromise, and also when to hold firm, like in his recent summit with North Korea. He knows the economy, and has improve it greatly. My family, as a few are self employed or commissioned, have not seen as much job opportunities in years until Trump got in. Just recently, he pushed back ISIS and about wiped them out. He made better deals with other nations to ensure we be treated fairly. He’s standing up for our national security and protecting our borders and our resources. He’s given people a second chance even as part of the so called “tough on crime” party… Is Trump the most diplomatic? Not really… I will admit many of his tweets can be quite frank and pointed! But sometimes, the smooth talker isn’t always the best leader despite that polished appearance. Sometimes, you need to call a spade a spade even if it’s not flattering and hard to hear. I challenge you to find one conservative who’s not “alt-right” in some fringe extremist group, to say they voted Trump because they want to subjugate women and set back race relations 100 years… As for the assertions Trump is sexist or racist, I only ask, have you known him for being such things before he ran for office?

However, all this said, wait for it…. You have the right not to like Trump. Yes, I am accepting of others forming their own opinions on Trump or any other candidate. I don’t feel like people must be required to drool over Trump’s feet more than any other politician. Trump should be open to fair criticism and intense scrutiny as any other president should be. Not all of Trump’s ideas will fall through to the fullest extent. He can’t do it all more than any other man. But then again, name one president who fulfilled 100% of his campaign promises! If you feel Trump isn’t up to your standards, fine. Fine by me. The entire country doesn’t have to like whatever current president is in office or else there wouldn’t be a need to vote! 😉 If you feel the evidence is not sufficient enough to vote Trump in 2020, that’s your right in a democracy.

Here’s my problem though: Going absolutely insane over not liking Trump! See, not voting for Trump and threatening those who do are in two radically different ball parks! Saying Trump should be treated like a man, not a demi-god above the law is fair. What isn’t fair is spewing vitriolic allegations without actual proof, and doctoring “evidence” to suit your conclusions! Calling a man a “rapist”, a “racist”, a “fascist” demands heavy proof as those are very ugly accusations not to take lightly. Investigating voting fraud and cheating such as collusion with foreign powers if suspected is one thing, but keeping up the charade for two years going no where with any proof to actually impeach reflects far more on you than him. Coming up with wild conspiracy theories and failing to accept that maybe, just maybe, it was possible the nation voted him in like any other president in US history… Why is it so hard to just accept you didn’t get your way for once? How is he so radically different from any other past president you didn’t vote for? Other conservative presidents?

Know what I think? Your insane vitriol over Trump has actually drove me to like him more and has convinced me to vote him in in 2020. Believe it or not, in 2016 I wasn’t sure of Trump either. I voted for a 3rd party. I had reservations about his ability to lead this country and saw him more as the superficial celebrity. However, seeing what he accomplished in office proved himself to me. See? I can change my mind based on actual evidence! The other major factor too as mentioned, was seeing the absolute meltdown over him where he and anyone who did vote for him were branded “deplorable” and immoral people… Threats, violence, ostracism, etc…etc… all from the Left to try to drive us into silence over our current president has only further convinced me not to vote for your party! Before politics became a bigger part of my identity overall, if people reacted with such vitriol towards Obama, there is a good chance I might have voted for him in 2012! Not because I was a huge Obama fan at all, (I’m certainly not now!) but because any party who would react with such insanity and utter immaturity is not one I respect nor would take seriously to run my country. What pushed me away from the Left, other than strictly policy-wise, is indeed this outlandish behavior and lack of decorum!

By all means don’t vote for Trump if you feel he’s not up for the job. Just don’t go into a paroxysm of late stage TDS and foam at the mouth at the mere mention of Trump. Criticize Trump just like any other politician, but be big enough to admit when he does something right. Hold Trump accountable for his actions, but also defend him when he is being unfairly accused. Realize he will make mistakes, he won’t be able to fulfill all his campaign promises, but also realize that no other president was mistake free or achieved 100% of his goals. Donald Trump is human too, and he deserves to be allowed an honest mistake or an un-reached goal like any other president and human being. I’d love to talk more in detail over why the Left believes as it does about Trump, but thus far, I cant find any who are willing to talk in a clear headed rational manner without throwing ad-hominems at Trump supporters like me, or Trump…

So in summary, you don’t have to like Trump to make me listen to you. You don’t have to be in love with how he handles his presidency. I wasn’t with Obama the past 8 years he was in office. However, I never spewed vitriol, threatened, harassed and ostracized those who did like Obama. Nor did I believe every unsubstantiated conspiracy theory people brought up, blinded by my hatred. I can admit it if Obama did anything good for the country as well as see his flaws. I never screamed “Impeach!!!” just because I didn’t get my way for a few years. Put it in perspective: Trump is not dictator for life! You will get your way eventually, and we will again too. That’s just how a fair democracy works. No one gets their way all the time! I learned that in preschool. So Dear Liberals, you didn’t lose my vote or my respect because you don’t like Trump. You lost it when you lost your decorum, civility and outright moral conduct over not getting your way…

(PS. I know my tone is harsh in this letter, but consider how harsh you sound if you imagine all you say about us and Trump, only replacing us with you, and Trump with your candidate! I also note that if you want to be addressed in a more gentle manner, please extend the courtesy to us also in the future 😉 …)

— A Lady of Reason 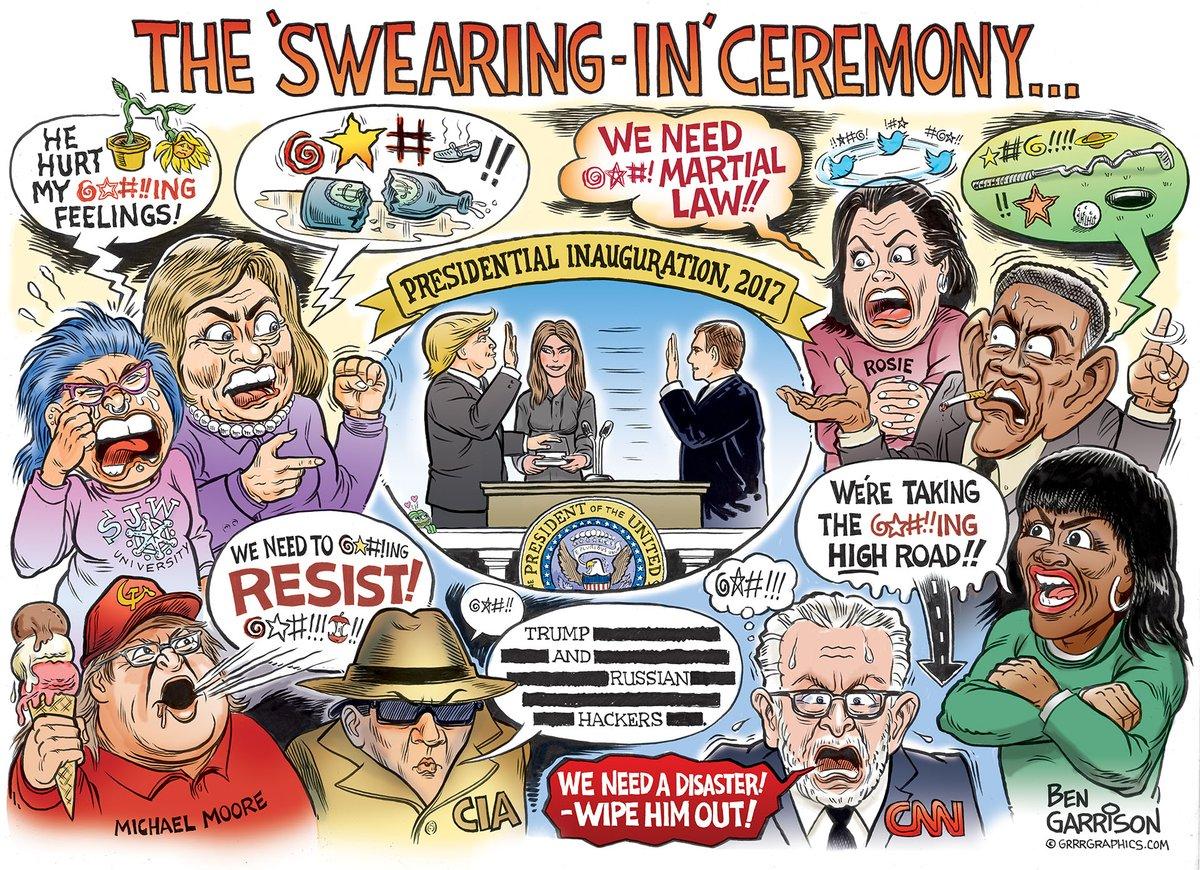