The Left’s derisive rhetoric and ideology has driven a wedge in much of society. From race wars, to gender wars. Gay versus straight, cis versus transgender. Black versus white. Christian versus Non-Christian. Etc…etc… Seeing the worst of intentions in innocuous comments. “Microaggressions” so microscopic yet so massive to the “victim”. Scapegoating, blaming, finger pointing, you name it! The Left fosters it. And what does all this un-nuanced black and white division do to society? You guessed it! Divided society at every level and among every group! Families are literally feuding over how one voted in 2016. Ostracism, insults, ultimatums are becoming more and more prominent in friendships, relationships, and families all over politics and social issues. An opposing opinion is no longer grounds for “disagreeing to disagree” then changing the subject. No! now it has to mean the other person is evil, bigoted, immoral, and even perverted in some cases!

Take this scenario, based off this article. A mom whose daughters are 13 and 15 wrote in to a columnist that she is upset that her husband and her father in law are telling jokes that all dads with daughters know about, such as “Dad better buy a shotgun for when they start dating!” Or “lock your doors!”. She claims it made her daughters uncomfortable as well as herself. The columnist wrote back in agreement saying that such jokes rob daughters of their agency, and make light of gun violence. Now, I agree with one thing: If the daughters don’t like it, they should stop out of respect for their daughters’ and granddaughters’ wishes.

However, lets dive deeper into what I argue this portrayal of this common family scenario has been seen through a lens of extreme projection and misguided conclusions. Jokes like those told by men one, are NOT taken literally (just like 99.9% of jokes!) and really meant to reflect a man’s sense of duty and honor towards his daughters, and more widely, protecting the women in his life. Quite frankly, a woman such as a mother, does not have the full sense of the dynamic between man-to-man interactions and how men express sentiments is not the same often as how a woman might express it. The “protect your daughters” jokes are an example of that. Grandpa was simply giving dad a man-to-man pat on the back so to speak, for the challenges of raising daughters and making sure their best interests are respected by any suitor.

The jokes are hyperbolic: Barring out and out abuse, a sane and reasonable man would not literally pull out a gun and terrorize a suitor! The point is that the jokes are meant to show how far a man would go to protect his daughter from mistreatment, exploitation, coercion or abuse if it were to occur, not that he’ll go out like a maniac waving a gun at every teenage boy in town! While of course, mothers also are deeply invested in protecting their daughters from predatory or toxic men, the special role of an honorable man has always been to guard his daughters until he knows her chosen one is worthy of her, beyond what a woman is expected to do.

Grandpa, who’s “guilty” of said jokes, is not being a perv, or a chauvinist who believes that his granddaughters should literally be locked up like in some 3rd world culture, but a man who in his wisdom, is supporting the dad in his role as protector. As to the other argument about agency and autonomy, one, what other areas of major life choices would you argue a young teenager should have complete and total autonomy over? And two, why not complain more about cultures who literally KILL their daughters over an unapproved suitor and force her into marriage at the age these girls are? Where’s the feminist outrage over that??? You can argue all you want you don’t want men to occupy that traditional role guarding his daughter’s hearts, but what would you say of a man who’s just like, “Whatever… What do I care about my daughter’s dating habits…” As for the daughters themselves, perhaps they were conditioned from day one to look at men as potential perverts and misogynists and were primed to read disgusting undertones in grandpa’s well meaning comments.  Just look at the Girl Scouts of America telling parents young girls hugging grandpa leads to sexual coercion at work 20 years later! Just because mom, not socialized to have the honor code of a man, doesn’t quite understand the subtle nuances of the dynamic between Dad and Grandpa, doesn’t mean they have nefarious intentions or sexist attitudes! My case rests… 😉

The next scenario, related to family matters, is the case of a mother on an online forum freaking out over her 7 year old daughter’s kitten heels she bought for some special event, like a daddy daughter dance, let’s say. I’ve also covered this topic before too, but what shocked me was the mothers reaction to what Dad said: She said she was fearful and troubled because Dad said, guess what? “Wow! You look so grown up!” to his daughter when he saw her in those shoes. Mom believes that Dad’s comment was perverted in the worst possible way, and that yes, implied it meant Dad was lusting over his little girl comparing her to a grown woman! Even more shockingly, multiple women agreed with her!

Now, to a sane person, it sounds just like a dad amazed, as any parent is, of how fast is child is growing up. Seeing his daughter, in her fancy dress, her hair done up, some light makeup, and in those cute little shoes for her special dance with daddy, it is not out of the question that as a parent, he could see in her in that moment, some of the woman she will grow into very soon. A beautiful woman he will one day dance with again at her wedding. Or send off to her prom. What only the sickest most vile pervert would see in a little girl in kitten heels is a sex object to lust over!!! In the fight to stop oversexualizing girls, the  women’s rights movement has ironically, sexualized them to the extreme by seeing everything that was once innocent, as now sexual, sick and perverted! I can only think of two scenarios. Number one, mom is wildly and wrongly projecting the most vile thoughts on her husband for being a sentimental dad, or she married a complete monster and doesn’t deserve to raise a child if she allows him to be near her daughter. I strongly suspect the former case is more probable…

Lastly but certainly not least of all, another example of how a family can be utterly divided by Leftist ideology is the common case of that relative who says something un-PC at the family gathering. Now, instead of just chalking it up to an older generation who were raised with different norms, or an innocuous comment that just came off as “insensitive” as opposed to a targeted insult, many Left learning parents are struggling with whether or not to let the kids see Grandma, or Aunt Sally, or Uncle Joe over “sexist” or “racist” sentiments that most reasonable people outside of the radical Left wouldn’t interpret as openly racist or sexist for instance. apparently, it’s not enough to say to your kids, “I disagree with what Grandma says sometimes, and here’s why, but we still love her even though we differ on certain subjects…”

Now, it’s all or nothing. If Grandma’s not “woke” enough, she doesn’t make the cut! Or maybe just be open and honest and tell Grandma, or Uncle Joe or Aunt Susie not to bring those topics up in front of your kids when they come to visit. Many, even if they differ from your perspective will honor your request. After all, 5 year olds care more about Grandma’s cookies than Grandma’s political ideologies! 😉 However, why can’t we just be brave enough to expose our kids to differing views then let them know they can make up their own mind in their own time without pressure from either side? We can’t grow as people without thinking deeply and thinking for oneself after all.

In all three examples, we see families utterly divided by the Left. Granddaughters that see grandpa and their own father as sexist creeps for wanting to protect them. A wife who sees her husband and father in law as misogynistic and not having their children’s and grandchildren’s best interests at heart. A mother who implicitly views her own husband as a sick pedophile lusting over his daughter on the grounds of saying as every parent says, “You look so grown up!”. Parents across the nation alienating their kids from their grandparents, aunts and uncles over politics, ideas the children don’t even know about or care about yet. Teaching the kids that an opposing opinion is immoral, and the person holding it is bad and to be written off without hearing why they have that “offending” opinion. If that isn’t division, then what is??? I have liberals and conservatives in my family, and among my friends. If I alienated everyone who doesn’t think exactly like me, I’d be one lonely person! 😉 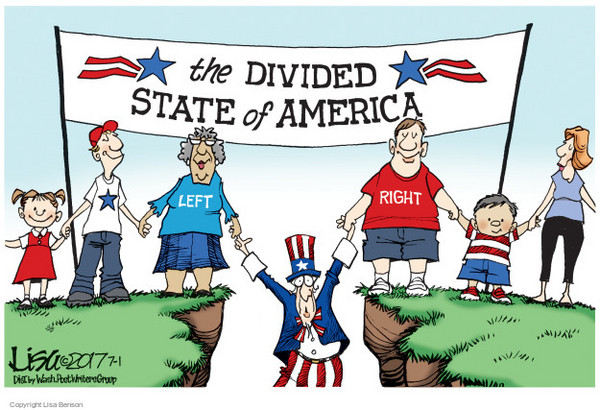 55 thoughts on “How The Left is Driving A Wedge…”