The Parkland shooting and many others that came before it has been on everyone’s minds lately. School and workplace shootings have become a sad reality in today’s society, and everyone is on edge. Was that just a balloon popping, or a gunshot? A car backfiring, a pane of glass falling, an unfamiliar face? We don’t think to look twice now just in case the our worst nightmare comes true. Now, people going out to eat, to the movies, to a concert, to church, to school, are all aware that could be their last outing. Safety is not a guarantee, never was, but certainly not now. Names like Columbine, Virginia Tech, Sandy Hook, to name some big ones, and now Parkland and Maryland now live in infamy and in the shadow of their tragic day. The obvious question is “what can we do to stop these tragedies?”. The Parkland shooting has become historical in that it spurred a new movement with more vigor and more attention with the nationwide school walkouts and the March for Our Lives rally in Washington DC. Their rallying cry was to do more than “thoughts and prayers”, then repeat when the next tragedy inevitably hits, but “policy and change” in hopes of preventing the next one.

On the surface, their goal is amicable. Why just sit around praying for some “divine” intervention or whatnot from Washington when one can help be the change and take action with our nation’s leaders to address the issue of school shootings. Why not draw more attention to school shootings than be complicit in the blasé  attitude of “oh, just another tragedy, ho hum…” It is a shame we have become so desensitized to mass violence, because it seems to happen every week! One would also think it is a very good thing the nation’s youth are a huge force in the movement, as it shows that it’s not just old middle aged policy makers who have a voice in our country. However, everything is not as simple as it seems.

If the March for Our Lives movement and that nation wide walkout were simply about raising awareness of school shootings and bringing to light the deep and complex conversations needed to think clearly on preventing the next one, then I wouldn’t have any qualms about joining in too. However, there is a huge part of the movement I cannot go behind and join in: the rampant Liberalism. I’m not saying just because liberals created the movement it automatically makes it invalid and that I must only listen to conservatives 100% and be in an ideological vacuum! No, the problem with the movement is that it is extremely one sided, and is anti-gun and demonizes the NRA. Their only solution is to place heavy restrictions and bans on firearms, affecting many responsible gun owners who use their guns for hobbies or self defense. Anyone saying differently is branded as a redneck ignoramus, or insensitive to gun violence and therefore demonized! The March for Our Lives movement is not a bipartisan organization, it’s not simply to honor the memory of the seventeen victims of the Parkland shooting. What it really is, is extremely liberal propaganda against any firearms and the NRA.

The issue of gun violence should transcend petty political feuds. School shootings affect conservatives and their children just as much as the liberals! We need to come together as a nation to address real solutions, not bicker in petty power struggles over who’s on the “right” side! The movement spurred by Parkland only succeeded so far in dividing the nation further, with its anti-Trump, anti-gun and anti-NRA rhetoric as the only solution to gun violence! Conservatives like myself who also wish to end gun violence feel alienated and cast out from the movement, as our solutions are portrayed as foolish and ignorant to the real solutions, the liberal solutions! Conservatives say arming teachers to protect students from the next shooter is a way to deter more shootings, but of course, the liberals think it’s ridiculous and ignorant. It’s an opinion that could only be held by die-hard NRA propagandists and rednecks! All they see is chaos and disorder, as if trained people who are taught properly how to handle guns and have had vast experience would somehow act like a buffoon once in school! That idea got “shot down” so to speak, so we proposed having security in school that are armed and even more trained in firearm usage. The reasoned response: get hysterical and accuse conservatives of draining funds away from education and putting schools under martial law!

Then not long after Parkland, there was a shooting in Maryland. Another horrific day, another school full of innocent people. However, there as a twist in this tale! Unlike the Parkland shooting, where the security guard stood outside as seventeen students got massacred, the security guard in Maryland responded within minutes and shot the shooter dead. Two victims died. Two. Not seventeen. Within minutes, the situation was contained. If I had doubts about the March for Our Lives movement before, they solidified then. You see, now there was concrete evidence a conservative solution worked. The security guard with the (gasp!) gun, contained the situation within minutes and there were drastically less fatalities. Two is still too many, but one must admit, better than seventeen. Even the extremely liberal media had to acknowledge the heroism of that brave security guard who did his duty and protected the school. Of course, CNN still did a pitiful attempt at twisting the story around to be consistent with the liberal agenda:

Gaskill’s actions were praised, rightly, across social media. But some — most notably, the NRA — held him up as an example of the “good guy with a gun” theory. The theory goes, that bad guys will always find a way to circumvent whatever gun laws are in place. And “to stop a bad guy with a gun,” as NRA head Wayne Lapierre said, “it takes a good guy with a gun.” (Lone Resource Officer’s Quick Action Stopped the Maryland School Shooter Within Seconds) CNN

So, they take a story that was supposed to commend the heroism of that brave guard, and twist it into an anti-NRA message that the NRA is pushing a false “good guy with a gun” agenda. But, wait a minute! Isn’t that what happened? A good guy with a gun saved the day! CNN and other liberal news sites couldn’t ignore the glaring evidence against their anti-gun thesis, so they are now grasping at straws to undermine a solution of ours that worked! All I can say is perhaps if there was a “good guy with a gun” beforehand, students across the nation would have walked out for two minutes, not seventeen.

It is quite clear, the March for Our Lives movement does not welcome conservative voices in the discussion to end school shootings and other gun violence. If you are pro-second amendment, an NRA member or supporter, or simply disagree with their virulent anti-Trump, anti-gun rhetoric of denial instead of defense, the Parkland movement is not for you. Of course I want to end school shootings as much as any liberal, why do you think other conservatives are speaking out too? We all want our children safe in school, for it to be safe to go out in the word without the ever present fear of mass violence. We as much as the liberals do, want a safer, happier, more just world. People like my family and I just think that we also need to face reality. As distasteful as it is, often might does make right. The person with the gun will not be stopped with a stern voice. If you don’t fight back, he will mow everyone down like lambs to slaughter. Why do you think the Parkland shooter managed to kill seventeen people, while the Maryland shooter only got as far as two? Here’s a hint: which one used a gun? Armed teachers and extra security are not ideal for what our schools should look like, but it is the sad reality we must all face until we can come together to make changes and address issues together as a nation, not on one side of the political aisle or the other.

Another point as well goes beyond guns. The March for Our Lives movement is not solely the creation of the millennial generation! Militant liberal groups have funded them behind the scenes, just like the Women’s March who want to push their own agenda aside from gun control. The March for Our Lives movement, I argue, is not so innocent. They exploited the Parkland tragedy and the seventeen lives lost, and the survivors, using them as propaganda tools for their own liberal anti-gun, anti-NRA and anti-Trump agenda. The national school wide walkout was more about grooming the next generation of snowflake liberals who will be mindless pacifists than honoring the seventeen victims. I think of the irony that they had those seventeen minutes to waste that day on liberal propaganda because no one came to those victims’ defense, unlike in Maryland where we could all have been waiting two minutes, not seventeen had there been another gun involved. The most disturbing thing was, it wasn’t just the student’s choice either to walk out. School administrators jumped on the fad and literally goaded students to do it, and of course, everyone fell into group think. I commend any student who stayed inside and followed their own convictions despite the backlash I’m sure they got. This wasn’t simply an exercise in learning about school violence, but one of telling the nation’s students to hate guns, the NRA and Trump. I don’t know about you, but such blatant partisan politics shouldn’t be allowed in school!

All I have to say about the whole fiasco is I weep at the state of society for these rampant school shootings, and want them to stop as much as anyone else. However, solutions conservatives offer are “shot down” ironically, by the anti-gun lobbyists! We have a voice too. We have ideas to help protect innocent lives before more are lost. Do we want more Marylands, or more Parklands in the next inevitable shootings yet to come? Why don’t the liberals let us have a voice too? Deny reality, and it will be more than just ideas getting “shot down” in the near future of our country. Change can start when people open their minds and see the reality of the situation. Awareness is half the battle! 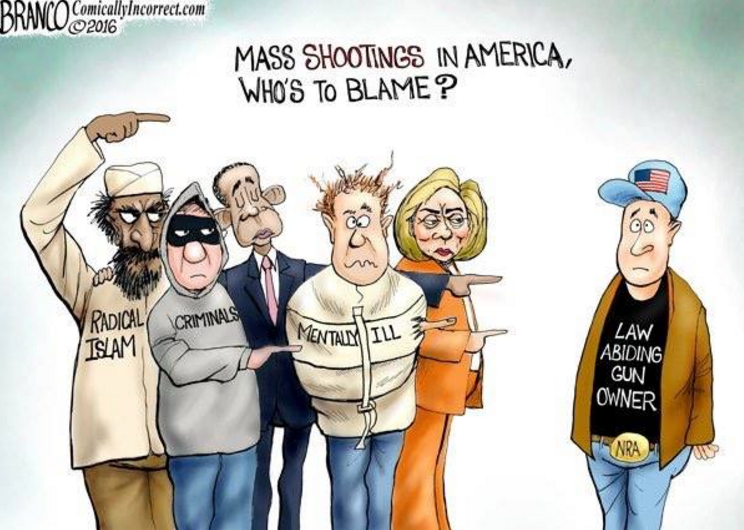 2 thoughts on “When it Comes to School Shootings, Why Must Conservative Voices be “Shot Down”?”