In the last post, we explored the issue of “gender neutral” language, and the politically correct censorship of traditional words like “man” to describe humankind. The smaller issue of using male gendered terminology excluding the acknowledgement of women in public life and the workforce and as a part of humanity was addressed in the last post and why the issue is ultimately inconsequential. This time however, I address the wider issue at stake: that the very use of gendered language is evidence of an implicit patriarchal attitude that women are literally “less than” fully human and that anything associated with womanhood is bad.

This issue goes beyond just language in relation to men and women, but things one would not normally think of as overtly gendered. A few feminists have proposed a theory, that our culture is implicitly patriarchal by the very way language our is structured. They claim that things such as thinking in opposing binaries, opposites if you will, such as light/dark, good/bad, reason/emotion, white/black, man/woman, active/passive strong/weak etc… are evidence of a sexist view. The reason being is that in these opposing binaries, one of the two things is considered superior, such as light over dark, good over evil, logic over emotion, active over passive etc… The more positive traits in their examples are traditionally associated with masculinity and maleness. They claim since Western culture thinks in these opposing binaries, and that all the favorable ones are associated with men, then that must mean it is anti-woman. Some even went so far to label our language “phallocentric” as they believe it favors the male sex. They also claim that the traditional logical and analytical mindset based on reasoning and logic is also a male quality, and since our culture favors it, it is inherently sexist against women and female qualities such as emotion and more fluid structures of thought and language. 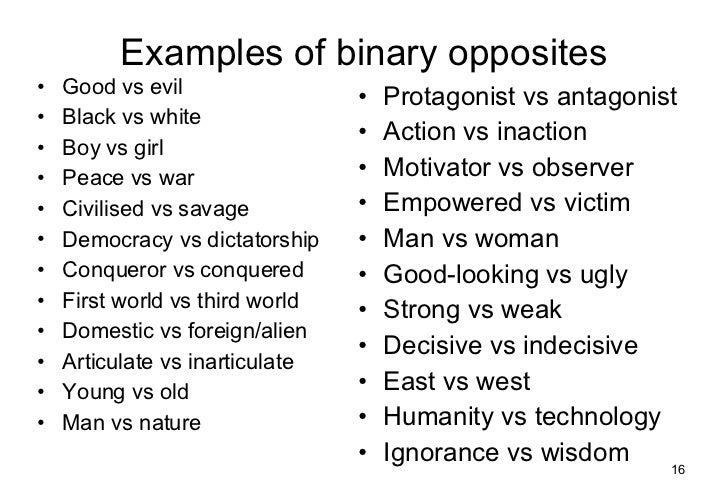 Many adherents to this view feel that the change needed is in “deconstructing” these binaries, and placing less emphasis on logical reasoning in Western culture. The issue with this view is one, who said that qualities like “good”, “light”, “active”, “reason”, “strong” and “white” as examples, necessarily have to be associate with the male sex? Word like “good” and “light” to me at least, have no gender connotations, “white” might have racial connotations, but not gendered ones to me. “Reason”, “strong” and “active” are words traditionally associated with men, but do they have to be? And if so, does that make them any less valuable? Who said the male sex owns the ability to view the world in an objective, rational worldview based on sound evidence and logic? I find it sexist in itself to claim that such traits are exclusively male in the first place and not qualities women can have as well! I personally don’t appreciate a hysterical, emotional, subjective mess of either sex! Plenty of men ignore reason in favor of emotion in many matters equally as women! Humanity seems to have a tendency for using emotion over reason in general… I agree that reason is better than pure emotion to guide us through our worldviews and perceptions, but not becuase it is “male”, but because its merits transcend gender divisions. Conversely, are we to say that men, by nature are unfeeling and apathetic, and traits like compassion and empathy are negative for humanity on the assumption that it is associated with femininity? Try telling that to many of the great humanitarians and moral activists who happened to be male! What is wrong with being assertive and trying to take control over what happens in your life? Many women are encouraged by feminists to have more autonomy and control over their lives by being assertive. Are we to reason this assertiveness is exclusively a male trait, and that women shouldn’t be assertive because it means trying to be like men and devaluing women? I think not. Assertiveness in itself has benefits that apply regardless of gender. My point is, just because a trait might be traditionally associated with one sex or the other, doesn’t meant that the trait in itself is invalidated or any less beneficial! So what if reason is associated with men? Or compassion and empathy with women? Doesn’t it sound silly to conclude that just because certain things are associated with one gender, in this case men, one should dismiss it in order to reject masculinity?

To me it sounds pretty immature and petty. I mean seriously? Women should reject traditional methods of reason and logic or an objective worldview based on the idea that it’s associated with men and therefore patriarchal and sexist? I don’t know about you, but to me, rejecting reason would only make any sexist thoughts about women worse and only confirm the stereotype of women being hysterical hormonal wrecks! The idea that our thinking style, one of binaries or based on logic and objectivity is inherently “male” is only sexist in itself in that any beneficial characteristics in our thought processes are owned by the male sex, and not a shared treasure among humanity as a whole. The idea seems to implicitly say that women are indeed not rational beings, and are indeed lesser than as qualities labeled as theirs are lesser than men’s. Trying to “fight back” by rejecting clearly beneficial things like rational analysis, assertiveness, strength, etc… only confirm that implicit idea that they are for men only, and rejecting them to reject maleness inherently accepts such notions as true. Why can’t we see the traditionally “masculine” traits as beneficial for everyone, not just men, and embrace them as good for humanity all together? Let’s get over our obsession with whatever traits are traditionally associated with, and just embrace the benefits of them, regardless of what sex you are.

This whole idea of our culture being “phallocentric” due to favoring traits associated with maleness that are actually neutral, and that logical reasoning is patriarchal, is absurd. Our specific thinking style and worldview might differ from other cultures, but that does not mean it shows that we think women are inherently “bad” or subversive, or less people than anyone else. Associating male traits with a fuller personhood is sexist in itself as it confirms the belief that maleness= personhood. Yes, the idea of the autonomous agent, the assertive, reasoned, logical, objective person, able to control one’s own destiny and choices in life, strong in body and character is describing the ideal man. However, this image of the “ideal man” can equally apply to women, and the traits in themselves that make up this now “ideal person” are still beneficial regardless of who possess them, man or woman. Rejecting them only serves to cut off your nose to spite your face, so to speak! Let’s be reasonable here: men and women can benefit from traditional binary traits deemed historically to be male. Crying “patriarchy!” whenever something remotely associated with men come up in life is like crying “wolf!” when there’s none: pretty soon, no one listens!…