In recent events, the whole #metoo movement reflects the radical feminist notions discussed on previous posts such as the whole “victim blaming” excuse to shut up criticism or doubt in sexual assault cases, turning them into witch hunts where no one is innocent, and women are infantalized into little children, unable to tell the difference between consensual sex and sexual coercion and choose to not fall victim. It also reflects a society of “hook up” culture, and I can dress however I want, act as provocative as I’d like, and absolve myself of any responsibility of unwanted sexual attention. I have said this again and again, the way a woman dresses or acts does not justify any type of assault on her person, any more than carrying valuables justifies mugging. However, acknowledging that carrying valuables out in the open will temp unstable criminals to mug you, is no different from acknowledging that how you act and dress can send off the wrong impression to guys who would never harass an unwilling woman, and offset unstable men who would assault a woman. In both cases the crime is never okay, but the “victims” can take some personal responsibility for not taking a wiser course of action to prevent them from becoming victims of crimes. The hysteria over the matter only infantalizes women and views them as small children, naive and incapable of taking any personal responsibility for their own foolishness.

Not to mention, in the case of the #metoo movement, and ones like it,  these women only “came out” 40 or so years later, decades later after the supposed crimes took place. There is a reason for statues of limitations, and it’s not to disempower victims. It’s there as a safeguard as memories fade and get distorted, and evidence erodes away until it’s just “he said she said” and there would be little to no due process for the accused, a basic right in a democracy. Yes, even a perpetrator is deserving of his day in court under a fair trial. Think of it, if he is innocent and is declared guilty, not one, but three injustices are done. The innocent person is punished for a crime they did not commit, the victim does not get justice on the perpetrator and does not have closure, and the real perpetrator walks free. It’s a lose-lose for everyone who wants just punishment for horrible crimes. Also, it raises questions as to those women’s true motives, even if they did have a case. They are not little children who take until they grow up to know they’ve been wronged. If those women really wanted justice for how they were wronged, they would have spoken up long ago. What the probably wanted was money, or to undermine whoever they’re accusing. Think of it, one stepped forward with allegations, now many more are? Sounds fishy to me, like a copy cat trend. Grown women know all too well about sexual coercion in the work place, or in politics, or especially in Hollywood. A woman getting a leg up sleeping with the boss is nothing new! It was wrong if those men in power or fame did coerce them, but they should be held accountable for taking up the offer! Even teenagers know the deal, and I don’t exempt them either. 15 is not 5. A teenage girl is not “innocent” of sex as a leg up in one’s career. The feminists providing their pity party treat these women like small children who have been molested and are only now coming out. Come on! They know what they were doing when they “came forward”, and that was to either get money, or undermine the person they’re framing as the perpetrator. If it was a deep personal slight, they’d have spoken up ages ago. For those who might have not liked sleeping to get ahead, too bad. They took up the offer anyways.

Also, even more inflammatory to admit, many famous men know that there are plenty of willing women who want to manipulate them sexually to get a leg up and use them. “Groupies” will go after many a hot male celebrity for his power, influence and money. Same for women with politicians and athletes. If by the off chance, he makes a mistake and flirts with an unwilling woman, one, it is up to her to make it very clear she’s not interested, and number two, if he doesn’t respect her “no”, to report it then, not decades after the fact! It is not out of the question, for a woman who flaunts herself for superficial gain, to also have no loyalty, no standards, and throw someone under the bus to gain something. Even when she knew she consented at the time, she is all the willing to lie and say she didn’t for money or other motives. Now, not all the #metoo women and others may be like that, some might have a real case, but that’s to be determined in a court of law, and if there’s not enough evidence, then it’s “innocent until proven guilty”, not a PC liberal witch hunt, nor should it be decades after the fact! Even if some of these charges are true, I don’t see you as a “victim” when at the time, you didn’t speak up for yourself and bring the perpetrator to justice, but instead didn’t care enough so you waited decades only to come out later for your own superficial gain like money or power. I mean, you’re not a little kid, who didn’t know what happened, or petrified of some scary adult, you were a mature woman and if you cared enough about what happened, you should have spoken up when you had a solid case, and so your perpetrator wouldn’t have assaulted others. That’s a point too. If those men like Crosby, or Weinstein did what they were alleged to have done, not reporting him sooner led to other women being victimized. The women who are coming out only now, if not acting unethically for framing them for superficial gain, committed an injustice themselves for staying silent and allowing them to allegedly harm even more women and young girls.

I ask women going into industries such as Hollywood, or politics, or anything really, to decide not to be like those women coming out on TV. Don’t wait until decades later to report something, and let a perpetrator hurt countless other women! Don’t falsely frame someone for your own seedy and unethical motives. Demand fellow women acknowledge personal responsibility for poor choices such as falling into the wrong trap and lowering their standards for cheap personal gain. Stand with women who take real proactive steps to prevent sexual assaults, and not just put on provocative clothes and act provocatively then cry victim when a man gets the wrong message. Be Ladies of Reason. Have some common sense! While these “victims” and radical liberal feminists and the PC snowflakes say “#metoo”, Ladies of Reason say “#NotMe”.

Now that’s something I can say “Me Too” about 🙂 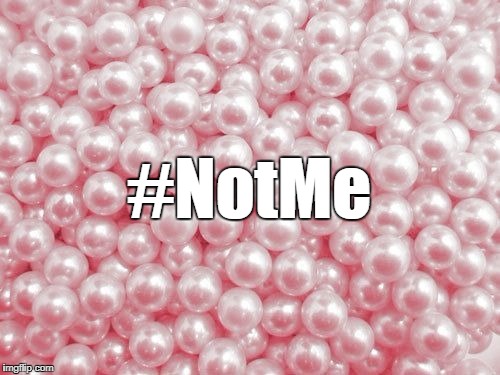