There seems to be a double standard when it comes to the majority group wanting their own private spaces, whereas a minority group is basically entitled to them in the PC world. This is no different for men versus women. Women more often than not, have many things that can be female-only spaces, from clubs, to schools, and of course, private bathrooms and dressing areas, like men. Many argue that this keeps women safe from sexually predatory men threatening women and in some cases such as separate dressing areas and bathrooms makes sense. However, the unfairness begins where women are allowed their own exclusive spaces elsewhere, but when men wish to make “men only’ spaces, they’re labeled as sexist. Gone are the days of the “no girls allowed” tree house, or boys only games. The PC feminists decry it as “gender discrimination” whereas girls can create their own girls only spaces. Now, I personally have no issue with either sex forming their own separate groups in many cases, there can be guys nights and ladies nights, men’s clubs and women’s clubs, the issue starts when one sex is told they aren’t allowed to but the other is. Some women, seeing the discrepancy, seem to think that every male space should also be a female space.

An issue that stems from that is the debate around men’s “locker room talk”. Locker room talk, for those who haven’t heard is basically the lewd joking around men like to do when among their own outside of polite company. Think of anything un-PC about women and gay people, and you get the idea.  Many women decry it as sexist and fosters the objectification and abuse of women. Men have tried to explain themselves, but are silenced by the PC liberal feminists who decided men can’t have a say in explaining their own behavior. The men who do speak out, acknowledge that it is said within male-only circles, such as sports teams, and friend groups, and not for women to hear at all! While I do agree much of locker room talk is indeed more lewd and off-color, I think the key thing that makes it acceptable is that, it was never for ladies’ ears in the first place! The men who are saying all the off-color sex jokes in the privacy of the men’s locker room for instance, never implied that they shout lewd obscenities at women or in mixed company. I would argue those PC liberal feminists cannot really understand the nuances of a man who respects women, but can also joke around with his buddies about them in private. Locker room talk has been around for ages. So has the abuse of women. Does that mean the two are necessarily correlated with one another, or that one caused the other? By that logic, men have worn beards for ages too since antiquity! Do men who wear beards also help cause a culture of disrespect toward women? Evidence suggests that it’s the men who are quiet, never speak of such things that are often the perpetrators of crimes against women. The normal healthy man who expresses a healthy sexuality, not a predatory one, is the one who lets it out with his buddies, than forcing his repressed sexuality on an unwilling woman. An unpleasant reality for the radical feminists, mostly every man they know and will meet has done juvenile locker room talk at one point or another. That doesn’t make them sex-predators or condone actual abuse of women.

Not to mention, guys aren’t the only ones who objectify people! Throughout high-school, I hate to admit, I have said quite “unladylike” things joking with my girl friends! I’d hate for a guy or a teacher to have overheard our lunchroom conversations with all the dirty jokes we’d do! Would people say, albeit being off-color, it promoted misandry? Equating certain foods to certain body parts unjustly objectified men? Just as our conversations weren’t for outsider’s ears, neither is the guy’s conversations in the team locker room! Also, how many times have you heard these radical feminists say they don’t want a penis in the room, or a “sausage party” at work, meaning men there? Isn’t that objectification, reducing a man to his nether regions? How would those women react if men demanded a vagina-free zone, or no “pussy parties”? Can we accept, that not all spaces are women’s spaces and what is said in them isn’t for us to hear or comment on? We talk of the “male gaze” in our lives but what about the “female gaze”, the constant nagging of radical feminists’ voices over young men’s shoulders telling them they can’t speak as guys in their own private space? Look, a man who makes obscene comments at women is in the wrong, but a man who in the privacy of the men’s locker room, or club with his buddies and makes an off-color remark about women is just being a guy. If we demand women’s only spaces where we can say anything we want, so can men. There’s a time and a place for everything, even locker room talk. Can we not overthink this? Guys will be guys 🙂 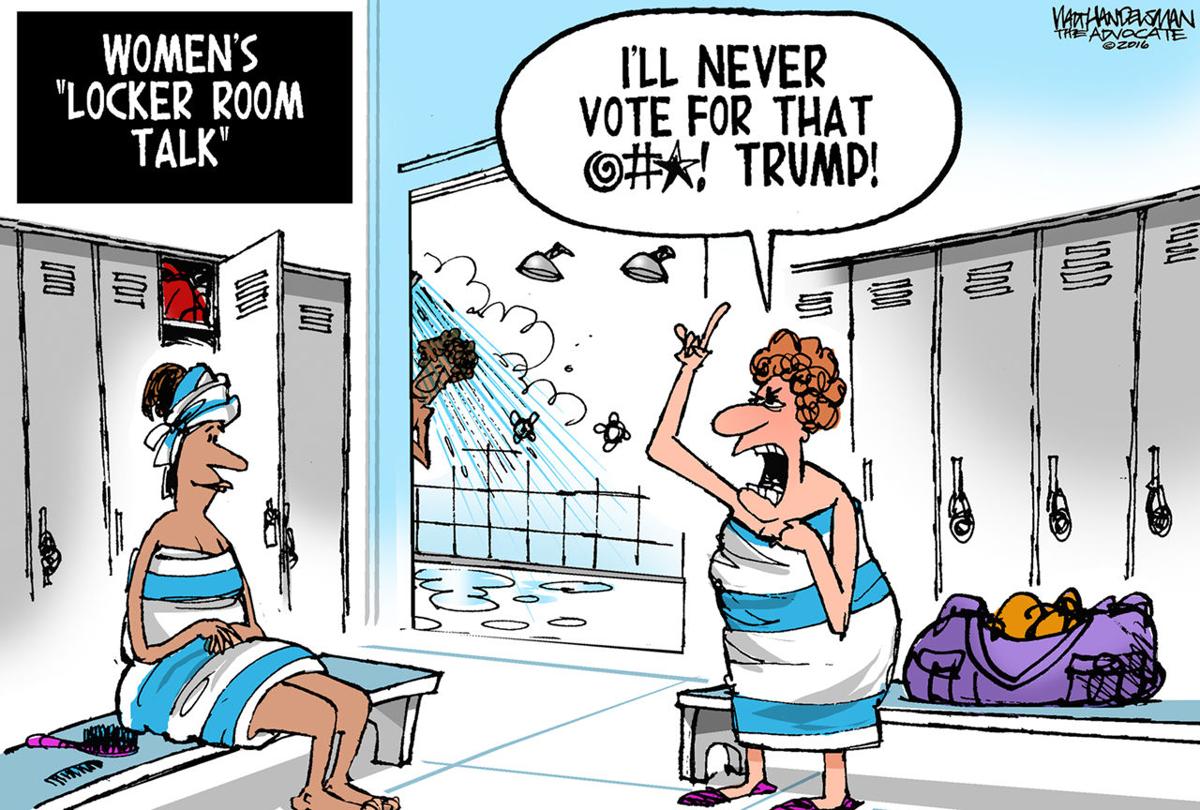